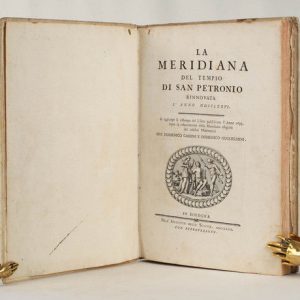 4to, pp. 56, vi, 1 leaf (with full-page engraving incorporating a portrait of Cassini on the verso, recto blank), pp. 88, and 2 folding engraved plates (one very large) measuring 36.2 x 60.5 cm printed on 2 sheets pasted together and 52.5 x 179.5 cm printed on 11 sheets pasted together. Some foxing (mostly light), signature on the first page of the dedication. Contemporary vellum, brown morocco label on spine (splash stain on lower cover).

FIRST EDITION, incorporating a reprint of Cassini and Guglielmini’s book with a similar title published in 1695. In 1653 Gian Domenico Cassini (1625–1712, the first of that dynasty of astronomers) began work on a new and larger meridian in the church of San Petronio in Bologna, replacing the one constructed by Egnatio Danti in 1575. The construction succeeded perfectly, and its success made Cassini a brilliant reputation. During the following years he made numerous astronomical observations, providing increasingly more precise measurements. They enabled him to succeed where Galileo had failed in producing ephemerides, published in 1668 and again in 1693, used by astronomers and navigators to determine longitude, and by Ole Rømer in 1675 to demonstrate that light has a finite speed. Eighty years later Eustachio Zanotti restored Cassini’s meridian. “Zanotti’s accomplishments also included the restoration in 1776 of Gian Domenico Cassini’s sundial in the church of San Petronio. The displaced perforated roofing slab forming the gnomon was raised slightly, restoring the instrument to its original height. The old deformed iron ship representing the meridian was removed and a solid foundation was laid as a base for new level marble slabs with the new brass meridian strip. Accurate geodetic and topographic measurements made in 1904 and 1925 have verified that the instrument has remained as Zanotti left it, that is, in the position that perfectly reproduces Cassini’s original conditions of construction” (DSB). The two folding plates are printed from the same copperplates used in Cassini and Guglielmini’s book of 1695, but the second plate, which at almost 6 feet long must be one of the largest in a scientific book, has an additional strip along the bottom illustrating Zanotti’s new brass meridian.