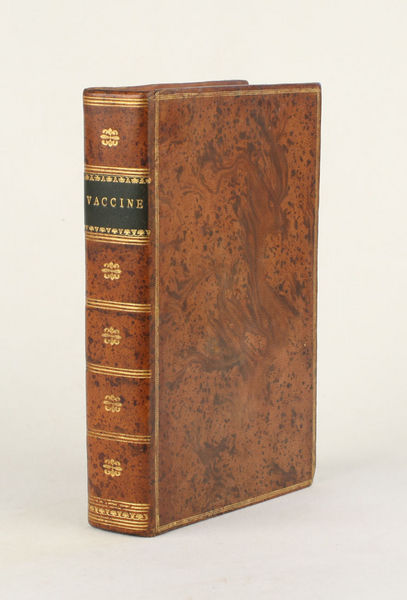 Reports of a Series of Inoculations for the Variolæ Vaccinæ, or Cow-Pox; with remarks and observations on this disease, considered as a substitute for the small-pox. London: Printed and sold by James Phillips and Son… 1799. [Bound with:]
2. WOODVILLE, William. Observations on the Cow-Pox. London: Printed and sold by William Phillips… 1800. [And:]
3. PEARSON, George. An Examination of the Report of the committee of the House of Commons on the claims of remuneration for the Vaccine Pock Inoculation: containing a statement of the principal historical facts of the vaccina. London: Printed for J. Johnson… 1802. [And:]
4. PRUEN, Thomas. A Comparative Sketch of the effects of variolous and Vaccine Inoculation, being an enumeration of facts not generally known or considered… [Cheltenham:] Printed for Phillips, Crosby, Murray, Dwyer and other booksellers. 1807. [And:]
5. CHRISTIE, Thomas. An Account of the Ravages committed in Ceylon by Small-Pox, previously to the introduction of vaccination: with a statement of…vaccine inoculation in that island.

5 works in 1 volume, 8vo, and with a folding leaf of doses of a medicine called “Human Life” with text in three columns in English, French and German bound between the third and fourth works. Contemporary tree sheep, gilt border on sides, spine gilt with green morocco label (beautifully, almost perfectly, rebacked), marbled edges and endpapers.

1. FIRST EDITION, and one of the most important works on vaccination after Jenner’s Inquiry itself: the first large-scale clinical trial of vaccination. “News of Jenner’s discovery had aroused interest among medical men, but his source of vaccine had been lost and further experiments with the new procedure were therefore impossible. Woodville remedied this in January 1799, when he was told of an outbreak of cowpox in a London dairy. Having compared the lesions among the milkers with Jenner’s illustration, Woodville took some fluid for use as vaccine at the Smallpox Hospital. The results of this action, the first large-scale trial of vaccination, were published as the Report of a Series of Inoculations for the Variolae vaccinae or Cow Pox (1799). Its case histories of two hundred vaccinations, most of which were subsequently tested by inoculation, did much to prove the efficacy of the new practice” (ODNB). 2 leaves, 156 pages. 2. SOLE EDITION. “However, the Reports [see item 1 above] also cast the first doubts as to the merits of vaccination. Woodville noted that vaccination frequently produced smallpox-like eruptions which he believed might communicate smallpox. This undermined one of the principal advantages of the new practice over inoculation—patients did not have to be isolated. Woodville’s observation sparked off a dispute between Woodville and Jenner. Jenner blamed Woodville’s results on contaminated vaccine: Woodville responded with his Observations on Cow-Pox (1800) arguing that hybridization between cowpox and smallpox was impossible. Thereafter the dispute fizzled out, unresolved” (ODNB). 2 leaves, 43 pages. 3. SOLE EDITION. “It became clear that Pearson was intent on claiming undue credit for this historic step in preventive medicine. In December 1799, he opened, without informing Jenner of his intention, an institute for vaccination, which he was to head, at 5 Golden Square. Though Pearson shortly afterwards invited Jenner, in a rather offhand manner, to be a corresponding physician, the latter resolutely refused the offer. The ensuing quarrel culminated in 1802 with Pearson's intense opposition to Jenner's successful petition for government compensation for loss of earnings resulting from his preoccupation with promoting vaccination” (ODNB). 2 leaves, pp. 188, (8), 1 colour-printed frontispiece. 4. SOLE EDITION. Pruen was a close friend of Jenner, to the point that he expected to be invited to write his official biography, as he knew him better than Baron did. This book is a history of inoculation and vaccination against smallpox, and a testimony to its success. 1 leaf (blank), pp. vi, 102, vi (index). 5. SOLE EDITION, and rare. “The systematic introduction of vaccination into Ceylon in 1802 and the general substitution of vaccination for inoculation were effected by Christie…so that by 1806 small-pox only existed in one district, that of the pearl fishery, to which strangers continually reintroduced the disease. In the course of his labours Christie made the original observation that lepers are not exempt from small-pox, are protected by vaccination, and may be vaccinated without danger” (Wikisource). 2 leaves, ii pages, 1 leaf, 104 pages. Half-title dust soiled, and inscribed “Astley Cooper Esq. with the Author’s Respects [&] Compts” (Sir Astley Cooper, surgeon, 1768–1841).