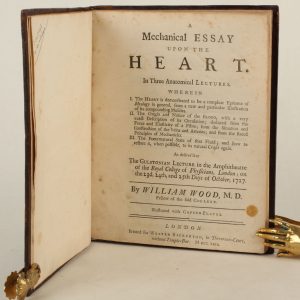 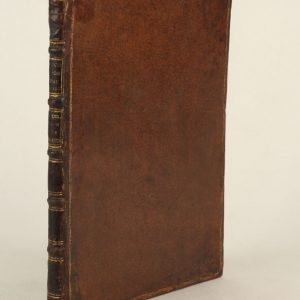 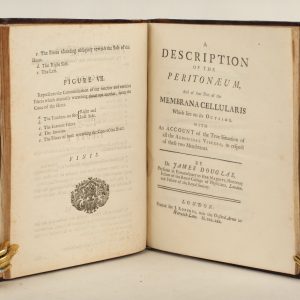 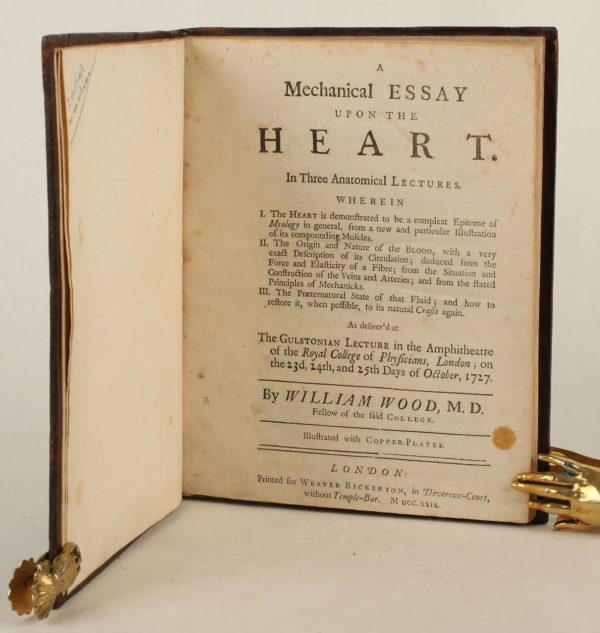 A Mechanical Essay upon the Heart. In three anatomical lectures. Wherein I. The heart is demonstrated to be a compleat epitome of myology in general… II. The origin and nature of the blood, with a very exact description of its circulation… III. The præternatural state of that fluid… As deliver’d at The Gulstonian Lecture…1727. London: Printed for Weaver Bickerton… 1729. [Bound with:]
2. DOUGLAS, James. A description of the peritonæum, and of that part of the membrana cellularis which lies on its outside. With an account of the true situation of all the abdominal viscera, in respect of these two membranes.

1. SOLE EDITION. This book is probably the third book in English on the heart after Harvey, and of great rarity. The first would appear to be Walter Charleton's Three anatomic lectures (1683), and the second Joseph Morland's Disquisitions concerning the force of the heart, 1713. The two plates illustrate, in twelve figures, the anatomy and myology of the heart. ESTC records 7 copies world wide, including 2 in the British Library. Notably Dr. Evan Bedford did not have a copy in his collection. Little is known about William Wood. Born in Lancashire and educated at Trinity College, Dublin, he qualified MD 1721 while at Queen’s College, Oxford. His only other publication was his Harveian oration in 1733. 2. FIRST EDITION, and the only edition in English (there were two later Latin editions). G&M 1217: “Douglas described the peritoneum in detail; his name is perpetuated in the ‘pouch’, ‘line’, and ‘fold of Douglas’. He was a friend of John Hunter and brother of John Douglas, the lithotomist.” His assistant at one time was William Hunter. Russell, British anatomy, 279.