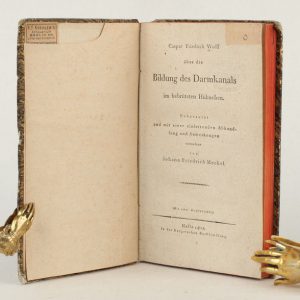 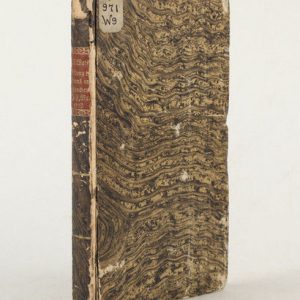 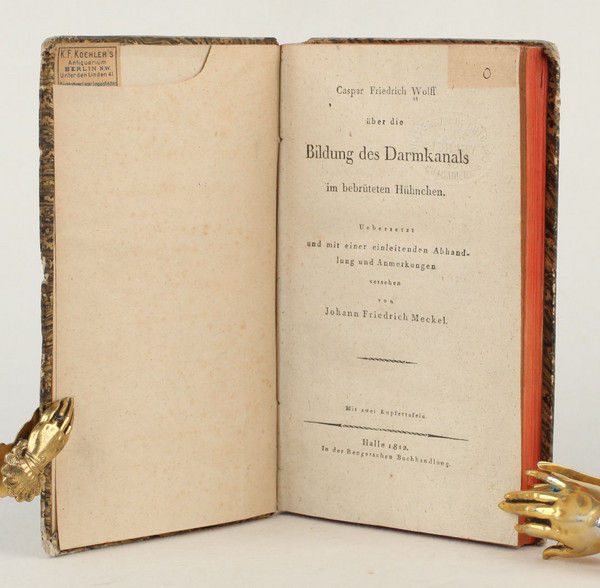 FIRST EDITION IN GERMAN and FIRST SEPARATE EDITION. See G&M 471 (the publication of the Latin original in the journal of the St. Petersburg Academy of Sciences in 1768–9): “One of the acknowledged classics of embryology.” Wolff’s description of the formation of the chick’s intestine by the rolling inwards of the leaf-like layer of the blastoderm was important for proving his theory of epigenesis, and at the same time disproving preformationism. These leaf-like layers were a potent influence in the work of Pander and von Baer, who praised this book highly. Wolff’s paper was largely ignored until this translation into German by J.F. Meckel, who added a 56-page introduction and notes. “The publication of Meckel’s translation of Wolff’s treatise on the formation of the intestines of the chick was an event whose importance, in view of the profound influence which this work exerted upon Pander and von Baer, it would be difficult to overestimate” (Adelmann). “It is interesting to note that the facts brought forward by Wolff have never been contradicted, but have been used as a foundation to which numberless morphological embryologists have added facts discovered by themselves” (Needham). In several places Wolff describes the mesonephroi, the renal organs now known as “Wolffian bodies”. These descriptions are briefer than the ones in his Theoria Generationis (1759), “but are in some respects a distinct improvement on his earlier accounts” (Adelmann). Adelmann, Marcello Malpighi and the evolution of embryology, IV, 1652–1702. Needham, History of embryology, 221–223. See Speert, Obstetric and gynecologic milestones, 18–25.