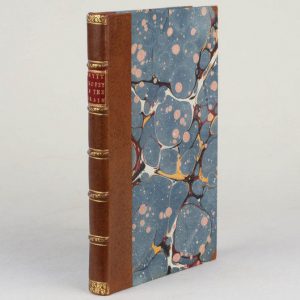 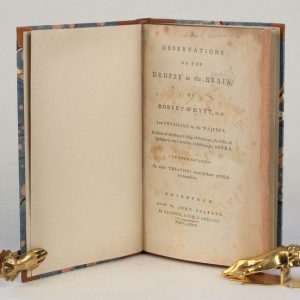 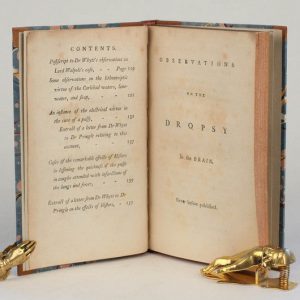 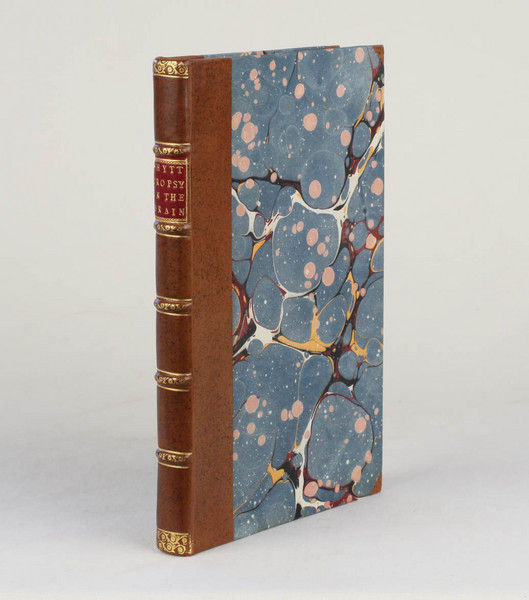 Observations on the Dropsy in the Brain. To which are added his other treatises never hitherto published by themselves.

FIRST EDITION, with the extremely rare appendix. G&M 4634. The first account of the clinical course of tuberculous meningitis in children. Whytt divided the disease into three stages according to the character of the pulse, and he attributed its various manifestations to the presence of a serous exudate in the brain. “It is a masterpiece of clinical observation, the finest first description of a disease to appear until then. Brief and lucid, the monograph is based on about a dozen cases in which everything of clinical value that could be detected without modern laboratory apparatus is recorded. Monro’s foramen, connecting the lateral and third ventricles of the brain, was first observed greatly dilated in one of the cases here described, which Monro (Secundus) and Whytt saw in 1764 during a consultation” (Samuel Radbill, enthusiastically, in DSB). This work was published by his son two years after Whytt’s death. The other papers printed with it, on experiments with opium, the strength of lime-waters, etc., had mostly appeared in journals, but the Observations appears here for the first time (it was also published in the same year in the Works). This copy has the Appendix which is rarely found with the main work. Still, History of paediatrics, pp. 443–449. McHenry pp. 112–120.