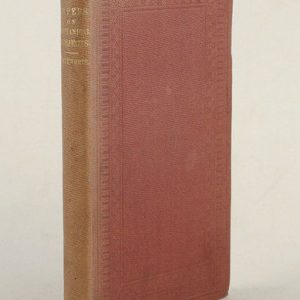 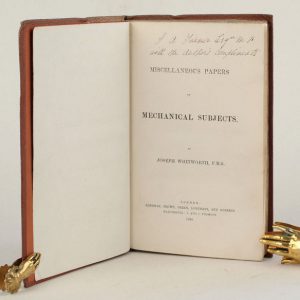 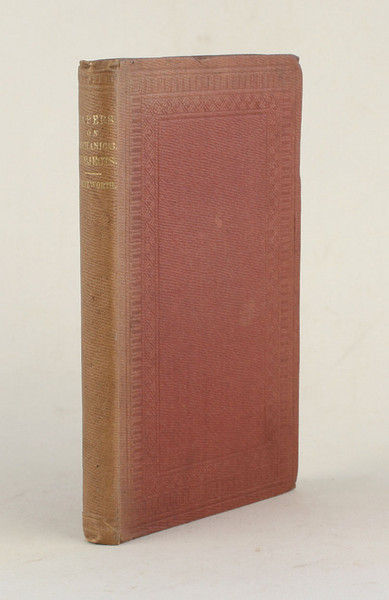 8vo, pp. viii, 183, (1), 2 hand-coloured lithographed plates. Plus Longman’s 24-page catalogue inserted at the end. Original red-brown blind-stamped cloth, uncut. Spine and part of lower cover faded to brown, otherwise a fine and fresh copy. Inscribed at the top of the title: “J A Turner Esq MP with the author’s compliments.”

FIRST EDITION, incorporating five papers each of which represents a major breakthrough in its field. The first paper, on the production of truly plane surfaces, “can hardly be overestimated, for it laid the foundation of an entirely new standard of accuracy in mechanical construction” (ODNB), and a natural sequel was the introduction of a system of measurement of ideal exactness. The second paper is the one for which he is probably best known, the introduction of a uniform system of screw threads, as until then every workshop had its own. In his presidential address to the Institution of Mechanical Engineers in 1856 Whitworth deplored the tendency to excessive size and weight in the moving parts of machines and the national loss by over-multiplication of sizes and patterns. In the fourth paper he proposed a system of standardisation of decimal measures, and the fifth paper is on rifled firearms. “Whitworth's rifle was not only far superior to any small arm then existing, but it also embodied the principles upon which subsequent improvements were based, namely, reduction of bore (to .45 inch calibre), an elongated projectile, more rapid twist, and extreme accuracy of manufacture” (ODNB). The appendix is Whitworth’s comprehensive report on the machinery exhibited at the New York Industrial Exhibition of 1853.