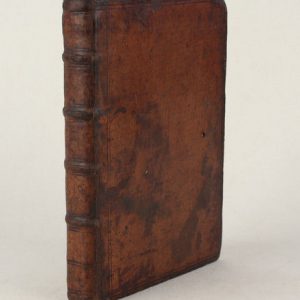 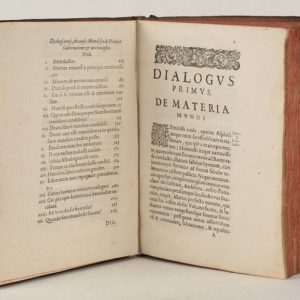 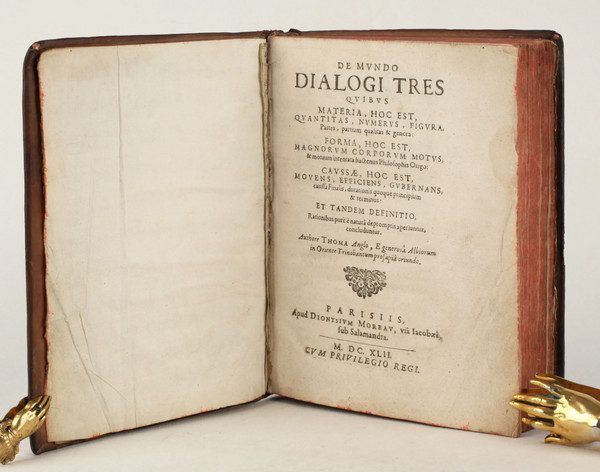 4to, pp. (xii), 446, (18). Two pages of diagrams on pp. (viii) and (ix). Contemporary English speckled calf (somewhat marked and with small hole in leather on upper cover, head of spine slightly worn), unlettered, spine and sides ruled in blind, red edges. Faint stain in fore-edge margin of preliminary leaves, single wormhole in upper corner throughout and a few wormtracks in upper margin but affecting headline or text on only 8 leaves, otherwise a very clean copy.

FIRST EDITION. De Mundo was inspired by Galileo’s Dialogo. Like Galileo’s book it is written in the form of dialogues, the first dealing with cosmology, the second with questions of motion, the third with problems of cause. “Galileo’s views play a part in the first dialogue, particularly with regard to the nature of comets, and his ideas on motion occupy most of the second dialogue. Although White repudiated the circular motion of the earth in this book, he took pains to set forth Galileo’s arguments at length and with care, giving special attention to his theory of the tides. Since Galileo’s Dialogo, in which these arguments had originally appeared, was a rigorously banned book, one may well wonder whether White was entirely opposed to Galileo, or whether he had in mind the purpose of keeping his ideas in circulation as much as that of criticizing them” (Drake). All of White’s own books were banned in 1661. White was a respected member of Mersenne’s circle in Paris, where he wrote his two major works of natural philosophy, De mundo being one of them. “…with his remarkable accommodation of Copernican heliocentric cosmology and newly revived atomic theory, White was later identified by Leibniz as one who had contrived to ‘reconcile Aristotle with modern philosophy’ (Southgate, 9). Favourable assessments of De mundo were made by contemporaries, including Descartes…” (ODNB). Thomas White (1593–1676), publishing here under the name of Thomas Anglus, was an English Catholic recusant who studied and taught at a number of English colleges on the Continent. He was a friend of Sir Kenelm Digby and Thomas Hobbes, who wrote a long critique of the present work which was only published in 1976. Stillman Drake, “Galileo in English literature of the seventeenth century”, in Galileo, Man of Science, ed. by E. McMullin (1967), pp. 423–424.