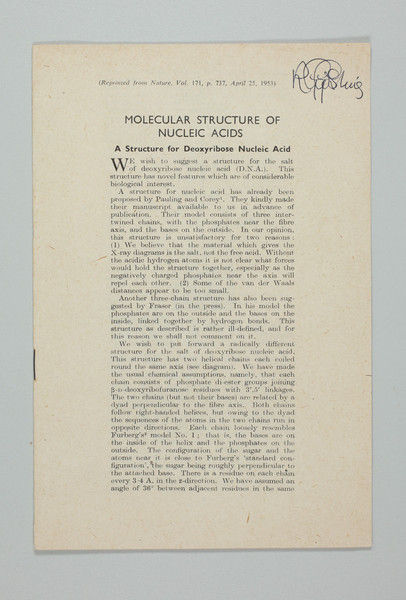 8vo, pp. 13, (1), with 2 photographs and 2 diagrams (including the double helix) in the text. Stapled as issued. A fine copy in a solander case. R.G. GOSLING’S COPY, signed by him on the first page.

OFFPRINT. G&M 752.1 (the first paper). The most important discovery in microbiology, and one of the most important in the whole of science, in the twentieth century. The identification of the double helix structure of DNA made it possible to understand the transfer of living matter from one generation to the next, with far-reaching implications. Watson, Crick, & Wilkins were jointly awarded the 1962 Prize “for their discoveries concerning the molecular structure of nucleic acids...” (Nobel, The man and his prizes, 201–202). This offprint contains the three papers as they appeared in Nature for April 25th, 1953. Realising their significance, the editor of Nature arranged for the three papers to appear together in the same issue, and further took the unusual step of publishing them together as the offprint. The format of the offprint is smaller, the journal being printed in double columns, but the type was not reset. The offprint was printed from the original monotype, from which stereotype plates were made in double columns for printing the journal. Dibner, Heralds of Science (2nd edition), 200. Grolier One Hundred (Medicine), 99.