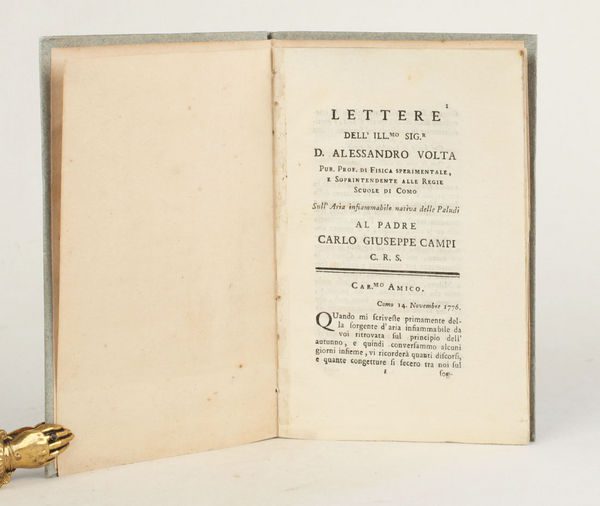 FIRST EDITION. The scientific discovery of methane. Prior to 1776, there was virtually no distinction between the various inflammable gases, and chemists were in confusion over them. The discovery and identification of natural gas (marsh-gas, or methane) by Volta was the first step in their clarification. “The collection of inflammable marsh gas is described by Volta in some letters to Carlo Giuseppe Campi…” (Partington). He collected it by stirring the mud with a stick and letting the bubbles pass into an inverted bottle filled with water. He distinguished it from hydrogen by its azure blue flame and slower combustion. “The testing of his new gas — new in source, flame, color and combustibility — led him into the faddish field of eudiometry” (DSB). Volta’s research led to his invention of an effective eudiometer, which provided the groundwork for one of the most important discoveries of the eighteenth century, the composition of water. This undated edition contains two letters from Volta to Campi, dated from Como the 14th and 21st November 1776. It is exceedingly rare, known in only a handful copies. Another edition, dated 1777 and containing five further letters, was published by Marelli a few weeks later. See Partington III, p. 814, Duveen 606, Neville p. 593, and Cole 1321, all describing the dated edition as the first, and presumably unaware of the present edition.