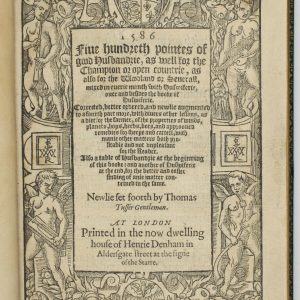 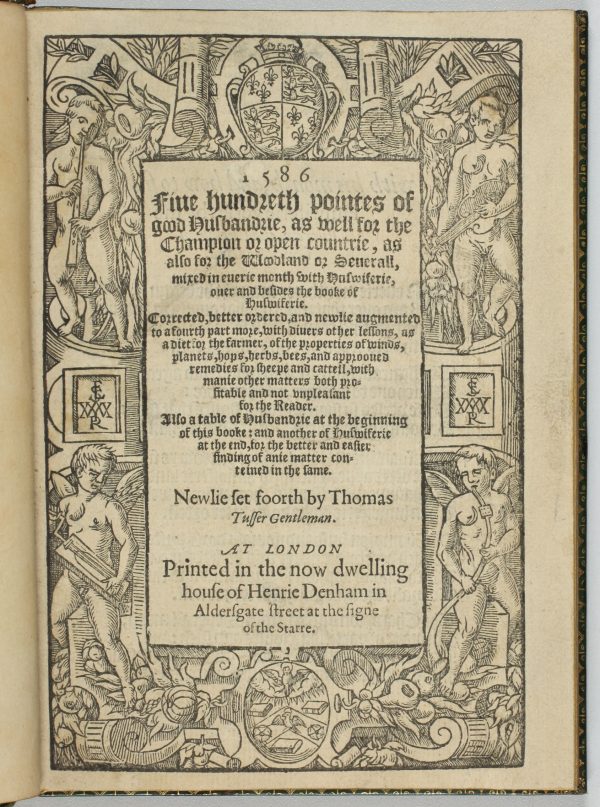 Five Hundred Pointes of good Husbandrie, as well for champion or open countrie, as also for the woodland or severall, mixed in everie month with huswiferie… Corrected, better ordered, and newlie augmented to a fourth part more…

At London: Printed in the now dwelling house of Henrie Denham…1586

Later edition, but many of the earlier editions are known in very few copies, of the second printed book on agriculture in English, and probably the biggest-selling book of poetry of the reign of Elizabeth I. “This celebrated book must be regarded more as a series of good farming and domestic directions and axioms, than as a regular treatise upon agriculture… Such are the works of Tusser, writings which were long the handbook of the English country gentleman. That they were popular is evidenced by the rapid succession of copious editions… “Tusser’s book is also interesting from the information it gives us of the habits of the farmers of more than three centuries ago. It is evident that they were able to obtain fish, for in his directions for the daily diet he mentions for Lent, herrings and salt fish,…while for Christmas fare they seem to have enjoyed many of the modern standing dishes” (McDonald). STC 24382. Fussell, The old English farming books, pp. 8–9. McDonald, Agricultural writers, pp. 23–30.