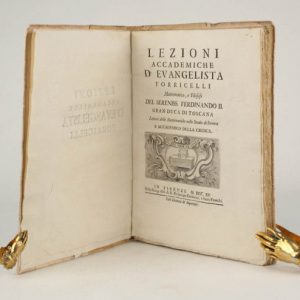 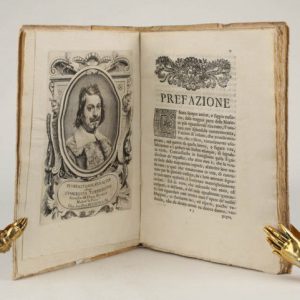 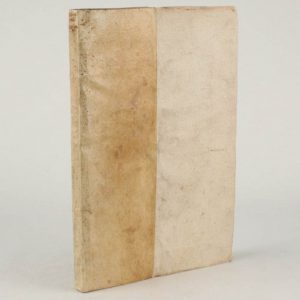 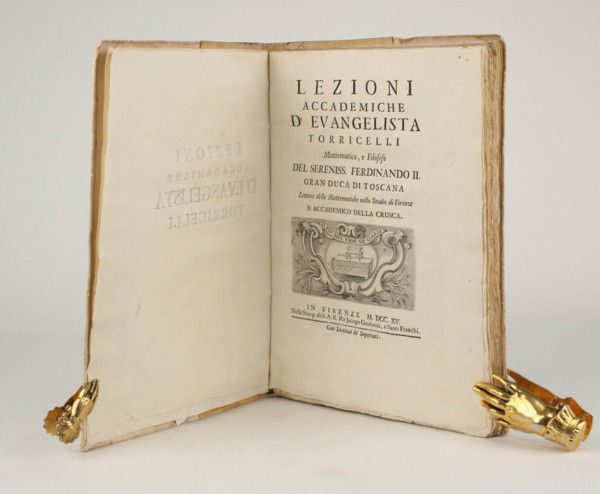 FIRST EDITION. Torricelli (1608–1647), Galileo’s most promising pupil, succeeded him as professor of mathematics at Florence. The present volume, published nearly seventy years after his death, contains the lectures he gave to the Accademia Crusca, and on other occasions. They deal with problems of mechanics, physics, meteorology, and military architecture, including also an oration in praise of mathematics. From the point of view of physics, the lectures on the force of impact and on wind are of particular interest. In the former he said that he was reporting ideas expressed by Galileo in their informal conversations, and there is no lack of original observations. In the lecture on wind Torricelli advanced the modern theory that winds are products of differences of air temperature (cf. Wolf, History of Science, I, p. 316). The 50-page introduction by the editor, Tommaso Bonaventura, is important for Torricelli’s life and works. It includes the two letters by Torricelli to Michelangelo Ricci of June 11th and 28th 1644, in which he described his invention of the mercury barometer, one of the most important discoveries in the whole history of physics, with a woodcut showing Torricelli’s barometer. Dibner, Heralds of Science, 149. Sparrow, Milestones of Science, 190. Parkinson, Breakthroughs, 1643. D.S.B., XIII, pp. 437–439. Cinti 169, reproducing the title-page. Norman catalogue 2088.