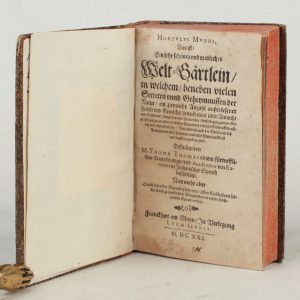 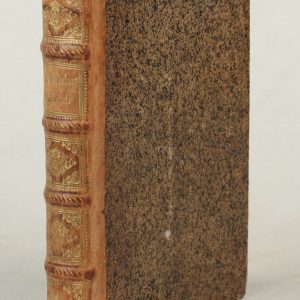 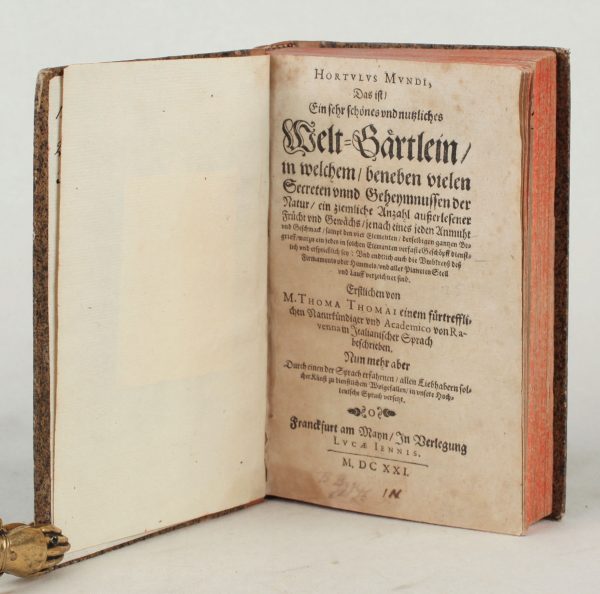 [1] FIRST EDITION IN GERMAN, second issue, of Tommaso Tomai’s Idea del giardino del mondo, a description of the natural world and of man, or the macrocosm and the microcosm, which continued to be published long after his death in 1593. It treats of the power of minerals, metals, plants, fish and other animals, of conception, pregnancy and childbirth, of the various parts of the body, and of the elements, air, and comets, and the effects of all these on the human body. VD17 23:271536F (1 copy only). This second issue appeared one year after the first (also only 1 copy in VD17). All editions appear to be extremely rare: Wellcome has the 1620 issue and a later Italian edition, BL has six Italian editions from 1586 to 1782, and NLM three Italian editions and a French translation.[2] FIRST EDITION. Francis Anthony took up medicine, but was rejected by the College of Physicians as inadequate. “As early as 1600 the college had noted that Anthony used a medicine made from gold and mercury. He had since become increasingly famous for this preparation, for which he claimed unlimited curative powers. He called it aurum potabile (drinkable gold). The college, unsympathetic to chemical medicine, arranged a trial of this secret recipe before an impartial and expert judge… Both sides claimed victory. Anthony then published a book, Medicinae chymicae et veri potabilis auri assertio (1610), dedicated to King James… Anthony continued to use his medicine in defiance of the college” (see ODNB for a full account of the events surrounding this book). STC 668. Duveen p. 25 and Ferguson I, p. 36 (1618 edition). Not in Neville. At the end is bound an imperfect copy of Nicolas Guibert’s Alchymiae Ratione et Experientia (Strasburg, 1603), lacking pp. 89 to the end, although the final part De Balsamo, eiusque Lachrymae, quod Opobalsamum dicitur…, with its own title-page and signatures, is present and complete.