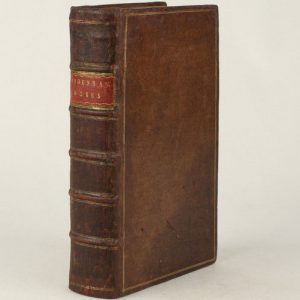 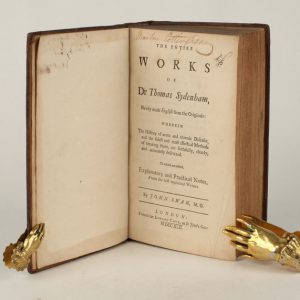 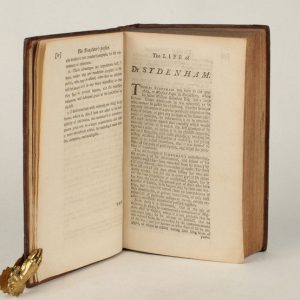 The Entire Works…, newly made English from the originals: wherein the history of acute and chronic diseases, and the safest and most effectual methods of treating them, are faithfully, clearly, and accurately delivered. To which are added, explanatory and practical notes, from the best medicinal writers.

First edition of Swan’s translation, and the first publication of Samuel Johnson's seven-page “Life of Dr. Sydenham.” The publisher of this edition, Edward Cave, was the originator of the Gentleman’s Magazine, which printed some of Samuel Johnson’s first published work. It seems likely that Swan was introduced to Cave who commissioned this translation and then commissioned a biography from Johnson. The “Life” was reprinted in the Gentleman's Magazine later in the year (December). Swan’s was the second edition in English of Sydenham’s complete works, after Pechey’s of 1696, but it was Swan’s edition that became the main English source for Sydenham’s thoughts until that of R.G. Latham in two volumes (1848–50) superseded it. “The sound judgement and acute observations of Thomas Sydenham, the English Hippocrates, freed clinical medicine from the last vestiges of medievalism, and set the pattern for further progress” (Dewhurst, Dr. Thomas Sydenham (1624–1689), p. vii. Meynell, A Bibliography of…Sydenham, 15.1. Fleeman, A bibliography of…Johnson, 42.11SW/1. Courtney, p. 12. Chapman and Hazen, pp. 125–126.