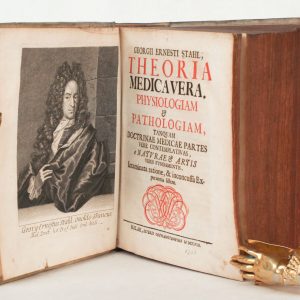 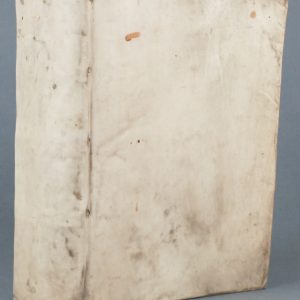 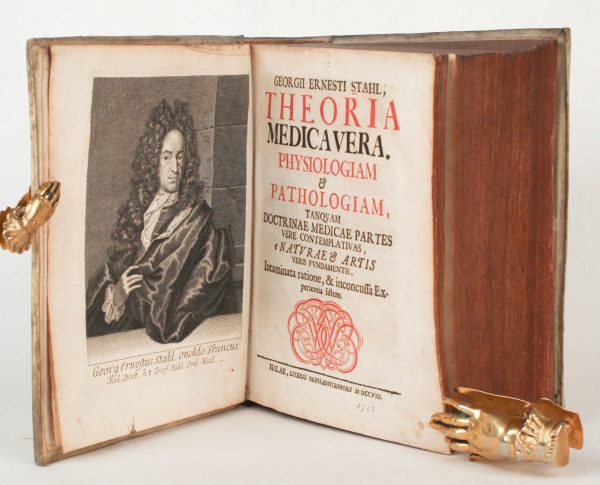 FIRST EDITION. G&M 69. “The True Theory of Medicine” was Stahl’s greatest single medical work. It provides in quite massive detail his doctrines of physiology and pathology. Stahl revamped Helmont’s idea of a “sensitive soul”, as the source of all vital phenomena, a concept which became the modern “vital principle”. Disease to Stahl was a disturbance of vital functions caused by misdirected activities of the soul. Stahl’s animism is of considerable importance to the anthropologist and the psychiatrist. In 1871, E.B. Tylor deliberately employed the Stahlian concept to explain the psychology of primitive man. As an advocate of psychotherapy, Stahl is a connecting link between the present and the past. He observed some of the remarkable effects of the mind upon the body, and his theory of the distraught psyche as a causa causans of disease contains the germ of Freudian doctrine. For an excellent review of Stahl’s prolix writing see Lester S. King in DSB; Stahl “influenced the whole of eighteenth century medicine; and his his imprint is being increasingly appreciated as historians trace his role in the drama of eighteenth century medical thought.” Partington, History of chemistry, II, 655–659. Foster, Lectures on the history of physiology, 168–173. Long, History of pathology, 120. Norman Catalogue 2004.