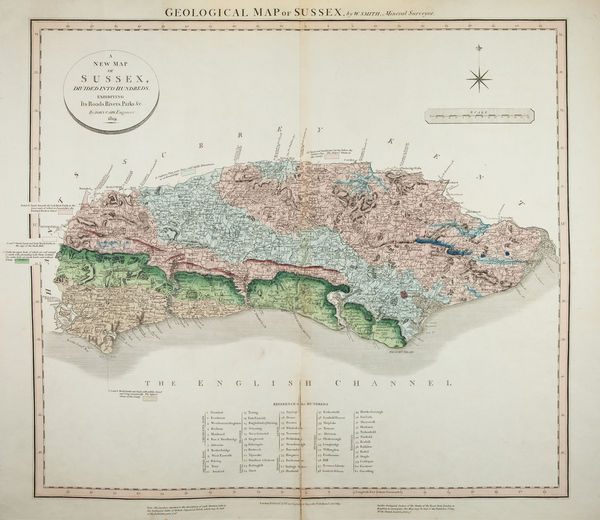 FIRST EDITION of William Smith’s geological map of Sussex, one of a number of county maps produced by Smith that were the first detailed geological maps of a specific area. Smith produced the first geological map of England and Wales in 1815, which contained “an amazing amount of correct detail” (DSB) and was the basis for all the geological maps that followed it. In 1819 he began the publication of a geological atlas of England and Wales. Published in parts over five years, it remained unfinished, containing 21 maps of English counties. “All the county maps published contain much more information than was shown on Smith’s large map of 1815, and indicate that during the intervening years he had done much to increase his knowledge. The maps are based on Cary’s county maps, and are headed ‘By W. Smith, Mineral Surveyor”. Each map measures 21 1/2 inches by 19 1/4 inches [across the ruled border]; the scale varies slightly but averages 3 miles to an inch” (Sheppard). The maps were sold separately in sheets or mounted to fold into a cover. The map of Sussex appeared in the first part (1819). The title above appears in the upper margin; another title is given in a circular tablet in the upper left corner: “A new map of Sussex, divided into hundreds, exhibiting its roads, rivers, parks, &c. By John Cary Engraver. 1819.” Sheppard, William Smith: his maps and his memoirs (1920), p. 155. Davis, “William Smith’s geological atlas and the later history of the plates,”, in J. Soc. Bib. of Nat. Hist., 2, 388–395. Eyles, “William Smith (1769–1839): a bibliography” in J. Soc. Bib. of Nat. Hist., 5, 87–109, 25 (but reading “Suffolk” instead of “Sussex”).