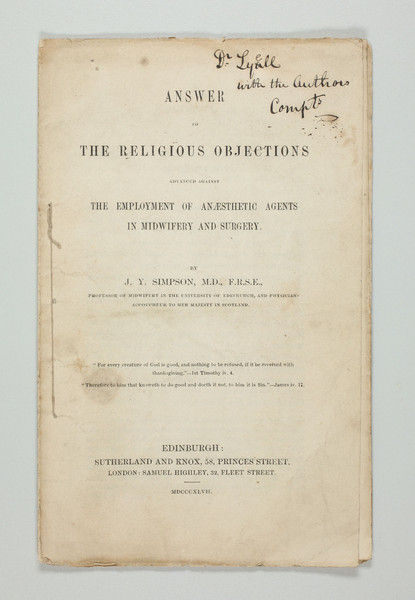 Answer to the Religious Objections advanced against the Employment of Anaesthetic Agents in Midwifery and Surgery.

8vo, 23 pages. Title and last page bit creased and soiled. Stitched as issued, uncut. Presentation copy, inscribed by Simpson in the upper corner of the title: “Dr. Lyall [corrected to Lyell] with the authors Compts”.

FIRST EDITION, issued no more than six weeks after Simpson’s first paper on chloroform. “As the leading advocate of obstetric anaesthesia Simpson met with much opposition and prejudice. Whereas the incorporation of anaesthesia within operative obstetrical procedures was relatively uncontroversial, Simpson's extension of its use to alleviate the pains of normal labour excited considerable criticism. A number of medical, clerical, and lay commentators took the view that parturition pains were either salutary or divinely sanctioned or both. But Simpson's advocacy prevailed and anaesthesia, generally with chloroform, quickly became standard obstetric practice” (ODNB). Fulton & Stanton VI.7: “This, the original edition, is very rare, the second edition of 1848 being more common…”