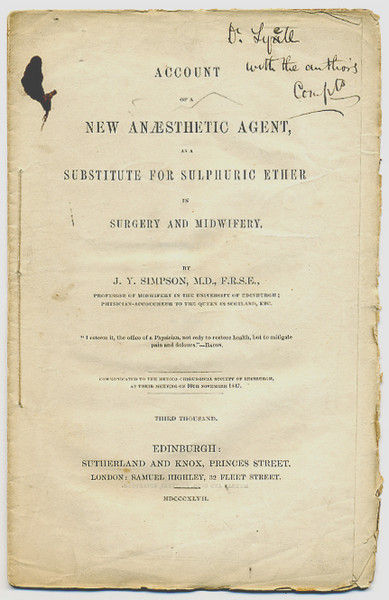 Account of a New Anaesthetic Agent, as a Substitute for Sulphuric Ether in Surgery and Midwifery. Communicated to the Medico-Chirurgical Society of Edinburgh, at their meeting on 10th November 1847. Third Thousand.

8vo, 23 pages. Stitched as issued, uncut (title and final blank page slightly soiled, and with an ink blot in the inner margin of the title). Presentation copy, inscribed by Simpson in the upper corner of the title: “Dr. Lyall [corrected to Lyell] with the author’s Compts”.

Second edition (second issue), published three days after the first (see below). This paper announced the discovery of chloroform as an anaesthetic. While seeking a less harsh substitute for ether, Simpson discovered the effectiveness of chloroform as an anaesthetic on 4th November 1847 (see Fulton & Stanton pp. 72–73 for the hilarious account of how he and two colleagues made the discovery in the dining room of his house). Four days later Simpson first used chloroform in an obstetric case with complete success, which he reported to the Medico-Chirurgical Society of Edinburgh at their meeting on 10th November. The first printed announcement of the discovery bears a postscript dated 12th November, and has the title Notice of a New Anæsthetic Agent; it has 22 pages, and only the Edinburgh publisher Sutherland & Knox in the imprint. It is extremely rare. The present second edition, sometimes called a second issue but the text was actually reset, has a postscript dated three days later (15th November); it has 23 pages and the London publisher Samuel Highley included in the imprint. It has textual changes, including an additional paragraph at the end stating that Simpson had successfully used chloroform in fifty cases to date. The title was changed to Account…, giving a less ephemeral air to the publication. This copy is the second issue, with”Third thousand” on the title-page. David Lyell studied medicine at the University of Edinburgh, in the years 1826–1829, at the same time as Simpson. After graduation Lyell took up a post in Berkshire, returning to Scotland in 1834 to open a medical practice in Dundee. Lilly, Notable medical books, 201. Parkinson, Breakthroughs, 1847. Thoms, Classical contributions to obstetrics and gynecology, pp. 29–34. G&M 5657 refers to the 3-page article by Simpson in the London Medical Gazette which appeared about a week after this paper. Fulton & Stanton VI.1 (first issue). Norman Catalogue 1945 (first issue). Osler 1480 and 1481 (first and third issues). Neither Fulton & Stanton nor the Norman Catalogue list the Notice (but Osler 1479 does).