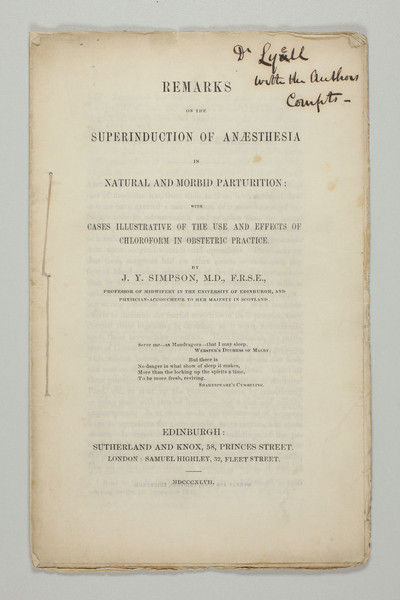 Remarks on the Superinduction of Anaesthesia in Natural and Morbid Parturition: with cases illustrative of the use and effects of chloroform in obstetric practice.

8vo, 24 pages. Stitched as issued, uncut. Presentation copy, inscribed by Simpson in the upper corner of the title: “Dr. Lyall [corrected to Lyell] with the authors Compts”.

FIRST EDITION, issue with “The End” at the foot of page 24 (the second of three, according to Fulton & Stanton). This paper was printed on December 1st 1847, seventeen days after his first paper on chloroform. David Lyell studied medicine at the University of Edinburgh in the years 1826–1829, at the same time as Simpson. After graduation Lyell took up a post in Berkshire, returning to Scotland in 1834 to open a medical practice in Dundee. Fulton & Stanton VI.5.