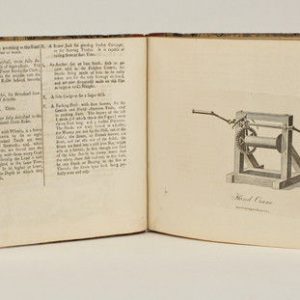 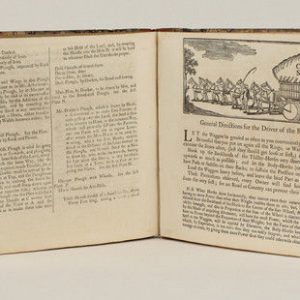 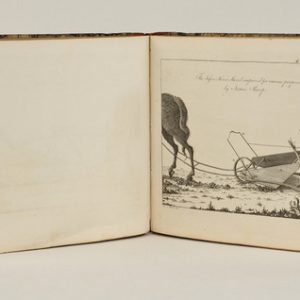 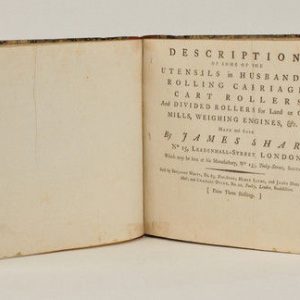 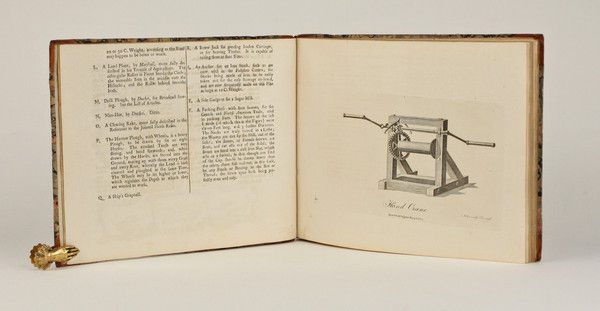 Descriptions of some of the Utensils in Husbandry, Rolling Carriages, Cart Rollers, and divided rollers for land or gardens, mills, weighing engines, &c. &c. Made and sold by James Sharp, No 15, Leadenhall-Street, London; which may be seen at his manufactory, No 133, Tooley-Street, Southwark.

Oblong 4to, 34 unnumbered pages and 19 engraved plates. Including the first leaf (printed title), and last leaf (docket title), woodcut on p. (29) of a “Common Stage”. Contemporary half calf (ends of spine and two corners a little worn), a beautifully preserved copy with original stab-holes visible in inner margin of some leaves, and a vertical crease down the centre (as intended, so as to show the docket title on the verso of the last leaf when folded). Contemporary armorial bookplate of Christopher Jeaffreson of Dullingham (Cambridgeshire).

Second edition (?), and a rare survival of an eighteenth century trade catalogue for a manufacturer of carts, agricultural machines and garden rollers. The plates show mostly agricultural machines, especially ploughs and hand-mills, but also garden rollers, a cart-roller, and carts (this plate is dated 1773). It includes a horse-hoe very similar to Tull’s original design, and a winnowing machine very similar to those still in use in the twentieth century. Apart from these products, Sharp also made weighing machines, anchors, trucks, and many smaller items such as axles and shafts. Agriculture, which was easily the largest source of employment in the eighteenth century, required advances in its technology in order to progress, and it was largely due to a lack of suitable machinery that Jethro Tull’s methods were slow to gain acceptance. This catalogue, probably among the first of its kind, shows some of the machinery and equipment that was available at the time. COPAC lists only two editions; another edition with only 28 pages and 16 plates, and with the imprint “Sold by Benjamin White…and Edward and Charles Dilly… ”, appeared in about 1777.