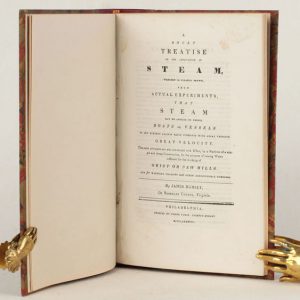 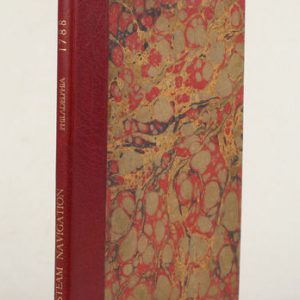 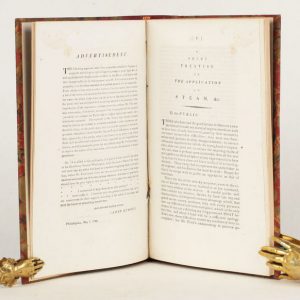 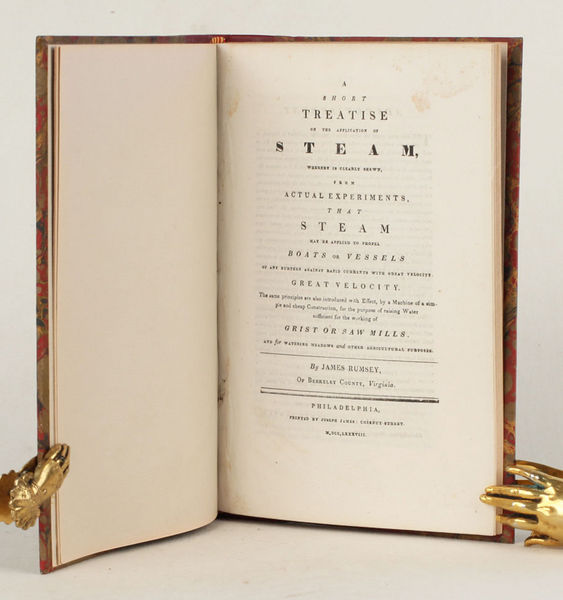 A Short Treatise on the Application of Steam, whereby is clearly shewn, from actual experiments, that steam may be applied to propel boats or vessels of any burthen against rapid currents with great velocity. Great Velocity. The same principles are also introduced with effect, by a machine of a simple and cheap construction, for the purpose of raising water sufficient for the working of grist or saw mills. And for watering meadows and other agricultural purposes.

8vo, 1 leaf, pp. 3–26. Small (2 cm.) hole in gutter, pp. 7–14 spotted. Modern quarter morocco. Bookplate (on the inside back cover) of Mario e Fiametta Witt, whose collection of unusual and interesting maritime books was sold in 1996.

FIRST EDITION (but see below), first impression with uncorrected title, of this incunable of steam navigation. During the 1780s James Rumsey and John Fitch each invented a steam-powered boat, Rumsey’s propelled by jets of water through the stern and Fitch’s by paddles. Fitch obtained a privilege for the manufacture of steam vessels, but Rumsey claimed priority for his steamboat, patented in 1791. These two vessels were the first successful steamboats in America. Although neither was financially successful, Fitch went on to inaugurate the first commercial steamboat service, on the Delaware River in 1790, which was, however, rather short-lived. Rumsey and Fitch never put aside their differences, but through their bitter rivalry they helped to bring an end to the patchwork state patent system, which was replaced by the first federal patent act in 1790. The Short Treatise includes a chronology of events, an explanation of the technical operation of the vessel, and affidavits. According to the “Advertisement” on the verso of the title, Rumsey states that this paper is reprinted with corrections and additions from “a pamphlet published in Virginia”, of which “a few copies were then thought sufficient”. However, neither Sabin nor ESTC records that pamphlet. Norman, citing NUC, states that it was reprinted from Rumsey’s A plan wherein the power of steam is fully shewn (Philadelphia, 1788), but that is not recorded by ESTC either. Rink suggests that an edition was printed at Richmond. Rink, Technical Americana, 2925. Norman Catalogue 185 (issue with corrected title). Not in ESTC; the present copy has “cheap” spelled correctly, and “…grist or saw mills. And for watering meadows and other agricultural purposes” at the end of the title, whereas ESTC 006431254, citing a single copy (NYPL) with the uncorrected title, has “chep” and “grist-mills, saw-mills, &c. and for watering meadows and other purposes of agriculture.”