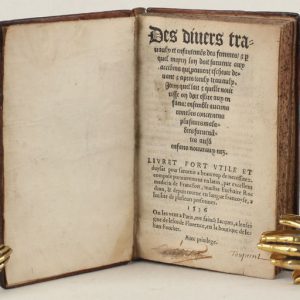 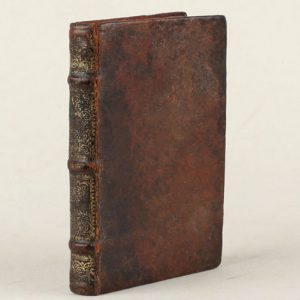 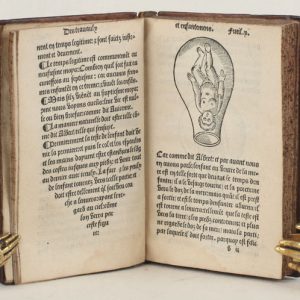 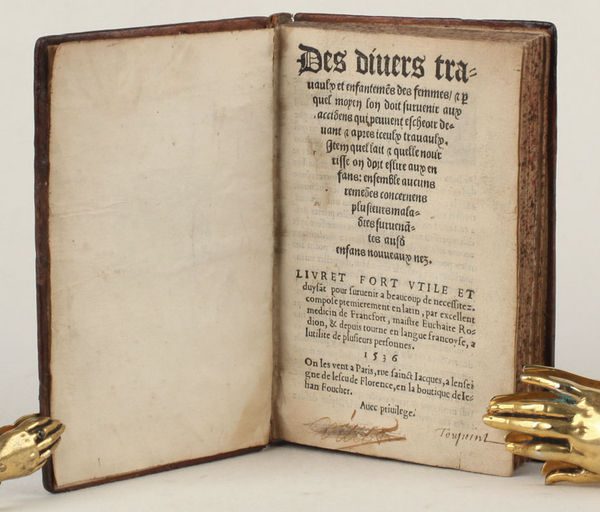 Small 8vo, ff. lxxxvii, (1). With 21 woodcuts in the text of the foetus in utero and the birthing stool. Text printed in lettre batarde, woodcut initials. Some minor pale staining, upper margin cut a little close. Early 17th-century calf, spine elaborately gilt (but the gilt somewhat rubbed), top of upper joint just cracking, head of spine and tips of corners restored. Early signature Toupoint in lower corner of title-page and another crossed through; bookplate of Docteur François Moutier (1881–1961), a pioneering French gastro-enterologist whose library of several thousand volumes, including numerous incunables, was dispersed at his death.

FIRST EDITION IN FRENCH of the first printed textbook for midwives, and one of the first printed books devoted to obstetrics, preceded only by the 13-page Büchlein of Ortolff von Bayrlant, and by the Secreta mulierum of Albertus Magnus. See G&M 6138 (first edition, in German, of 1513). Roesslin’s book had an enormous influence, running to over a hundred editions and translations. The striking woodcuts of the early editions not only mark it out as an outstanding medical book of the period, but revive in the printed book a tradition of obstetrical illustration begun in the manuscripts of antiquity. “Roesslin established the necessity for thorough instruction of midwives. In his versified preface he censured the wretched condition of obstetrics, and the ignorance, carelessness and superstition of the midwives, who brought about unnecessary deaths of numberless newborn. The infant mortality Roesslin bluntly labelled murder... In his book…he attempted to eliminate, or at least mitigate, these evils… From the practical obstetrical standpoint, the significance of the Rosengarten lies also in the fact that Roesslin again brought to the fore the knowledge of podalic version which had been almost forgotten since the time of Soranus and Mustio. He thus limited cephalic version, which has more theoretical merit but is less practical in execution” (Hellman). This first French edition is of particular rarity. It was not in the collection of Dr. Alfred Hellman, who possessed all three 1513 editions and the rare first English edition of 1540; his earliest French edition was 1539. See Hellman, A collection of early obstetrical books (New Haven, 1952). Klein, G. “Zur Bio- und Bibliographie Rösslins und seines Rosengartens” in Südhoffs Archiv, 1910, 3, 304–334. Klein’s own copy was, as he says, “heavily defective”. Wellcome I, 5508 (imperfect); COPAC also finds copies at Glasgow and Manchester. It is not in Durling but is in the NLM catalogue. CCfr finds 5 copies in France.