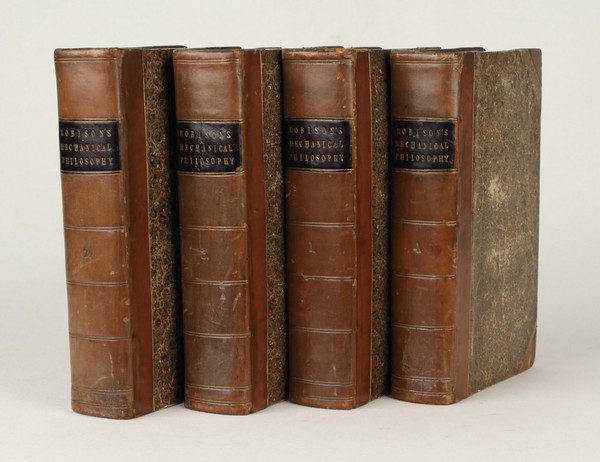 A System of Mechanical Philosophy. With notes, by David Brewster.

FIRST EDITION. Robison, who died in 1805, was a principal contributor to the third edition of the Encyclopaedia Britannica. His articles included two on steam and steam engines, which were republished by James Watt, the famous engineer and inventor, in 1818, and constitute Watt’s only publication on his inventions. The majority of Robison’s articles as well as some other material are here republished, and the editor Brewster prevailed on Watt to bring the two on steam engines up to date with notes and additions. Robison was himself acquainted with Watt; indeed it was he who first directed Watt’s attention to the steam engine, as Robison himself recounts in volume 2. The first volume is on dynamics, projectiles, corpuscular action (including Boscovich’s theory), and strength of materials (a term he was apparently the first to use). The second includes the articles on steam, and hydraulics; the third is on astronomy, the telescope and pneumatics; and the fourth is on electricity, magnetism, sound, music, watch-work, and seamanship (Robison represented the Board of Longitude in testing Harrison’s chronometer). Roberts & Trent, Bibliotheca mechanica, 280. Ekelöf 553. Wheeler Gift 791. Norman Catalogue 1839