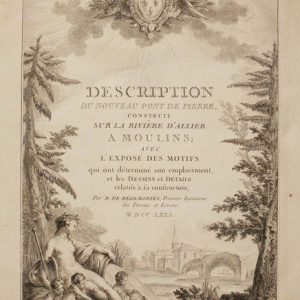 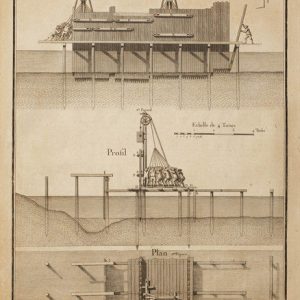 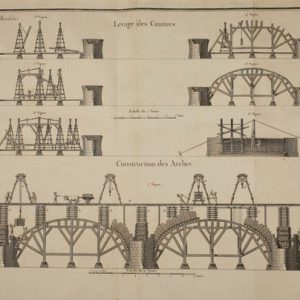 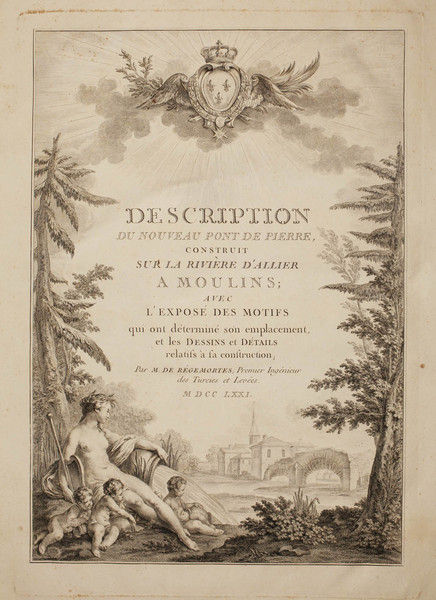 SOLE EDITION. A landmark book of bridge engineering, and a fine example of French eighteenth century technical illustration. Before Régemortes undertook the task of constructing this bridge, which he completed in ten years, four bridges had been built on the same site in less than fifty years. Since its publication this book has been recognised as being of great importance to engineers charged with the construction of similar bridges. “An extraordinarily handsome volume which documents the construction of a bridge across the Alliers River at Moulins. Composed of thirteen ovoid arches, it is considered one of the most beautiful bridges in France... His explanation for the failure of these earlier bridges, was, quite simply, that any foundations sunk in the sandy bed of the river were undercut by the strong slow erosion of the water. Régemortes’ solution was to set the main support for the bridge on the two banks of the river...” (Roberts & Trent). The suite of plates shows the construction of the bridges in its successive stages. Various new machines were used in the work: plates 6 and 7 illustrate the dredging machine used, plate 8 shows the sinking of the pilings, and plate 9 shows how the bed of the river was levelled. Roberts & Trent pp. 274–275, with a long account of the book. See also Hoefer, Nouvelle Biographie Universelle, 41, p. 837.