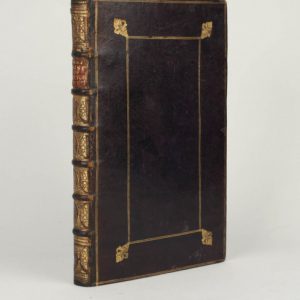 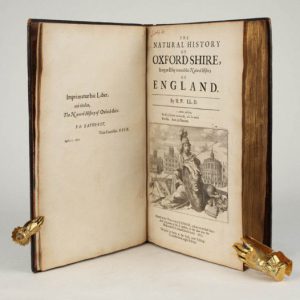 The Natural History of Oxford-shire, being an essay toward the natural history of England.

Oxford: Printed in the [Sheldonian] Theater…1677

Small folio, 6 leaves, pp. 358, (1) errata, (1) blank, (10) index, (2) blank, 1 folding engraved map and 16 engraved plates each with a dedication within an ornate cartouche to the owner of the land where the object illustrated was found. Imprimatur leaf before the title, large engraved vignette on the title, engraved headpiece and initial in the dedication. Paper slightly browned in the margins, short tear in the map. Contemporary dark purple morocco, sides panelled in gilt, spine richly gilt in compartments, red morocco label, gilt edges, marbled endpapers. Signature of J. Sotheby 1689 in upper corner of title, armorial bookplate of C.W.H. Sotheby.

FIRST EDITION, and a copy in an exceptional binding, of Plot’s extensive survey of the natural history of Oxfordshire in the true Baconian tradition, treating of its flora, fauna, geology, palaeontology and curiosities in general, with the stress on the unusual and anomalous. In this work Plot investigates the geology at length, including erosion and in particular an extensive study of the fossils, but without appreciating that they could be used to identify strata, although he did have some notion of stratigraphy. “Some seventy species of fossils are described and figured by Robert Plot in his work on Oxfordshire, 1677. Here we have excellent descriptions and beautifully engraved drawings of these objects from the Jurassic and Cretaceous. Among them are many well-known forms (given proper names by later authorities), such as the echinoid Clypeus plotii. He recognised the essential differences between those unrelated groups of bivalved shells, the braciopods and the lamellibranchs” (Challinor). On the strength of this book Plot was elected fellow of the Royal Society; a few years later he was appointed its secretary, then he was made the first keeper of the Ashmolean Museum in Oxford, and at the same time professor of chemistry. Loosely inserted in this copy are four pages of notes on the book, probably in the hand of James Sotheby, whose signature is on the title-page. This copy was among the heirlooms of the Sotheby family removed from Ecton Hall, Northants, and sold at Sotheby’s on 21/22 November 1955, lot 371. Tipped in is a manuscript note on the binding by Graham Pollard. Wing P2586. Adams, The Birth…of the Geological Sciences, pp. 258–259. Challinor, The History of British Geology, 10 (the sixth earliest book listed by Challinor) and p. 62. Edwards, The Early History of Palaeontology, pp. 5–6. Wing, A Bibliography of Dr. Thomas Willis, 92 (Willis’s work and books are discussed on pp. 301–305).