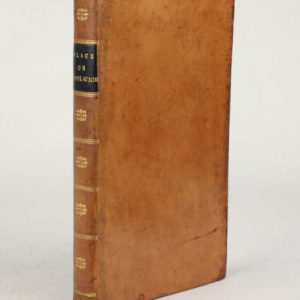 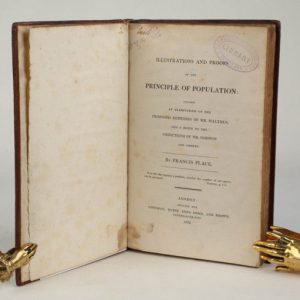 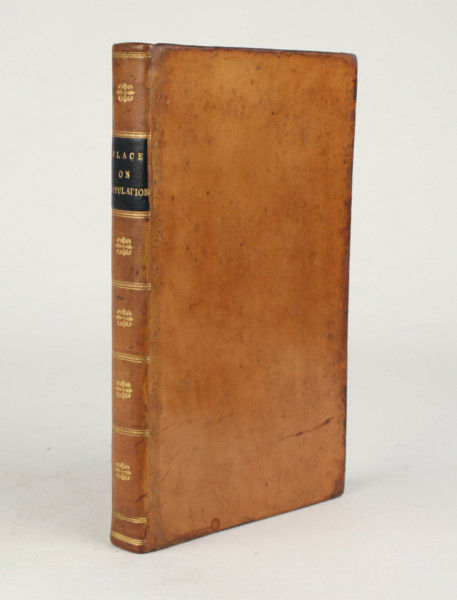 Illustrations and Proofs of the Principle of Population: including an examination of the proposed remedies of Mr. Malthus, and a reply to the objections of Mr. Godwin and others.

FIRST EDITION. Place was the first important proponent of birth control in any English-speaking country and openly advocated contraception in this book, a subject with important implications for population theory, economics, and social conditions. Francis Place had a hard upbringing in London, and during his early years he was at one time out of work and close to starvation. His business flourished, however, and by 1815 he was a prosperous man with time for reading and politics. “In 1808 he had met and befriended Jeremy Bentham and through him encountered James Mill, who in turn introduced him to the economist David Ricardo… Place accepted Bentham’s jurisprudence, Malthus’s principle of population, and Ricardo’s doctrine of the wages fund, but when Godwin published a defence of his position against Malthus in 1820, he wrote a lengthy reply called Illustrations and Proofs of the Principle of Population (1822). In this Place criticized Malthus for his ignorance of the conditions in which the poor lived and Godwin for giving up all hope for their improvement. If Godwin was too despondent, Malthus was too naïve to suppose that working men would be persuaded to avoid hardship by marrying later in life. Place himself thought that the poor could be persuaded to avoid the burden of large families only if they were encouraged to use contraception, and his frank propaganda for this lost him many friends” (ODNB). G&M 1696.1. Himes, The Medical History of Contraception, pp. 212–213.