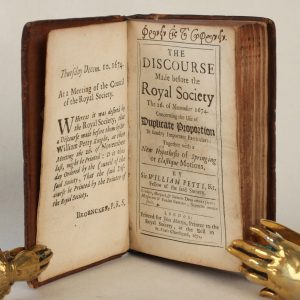 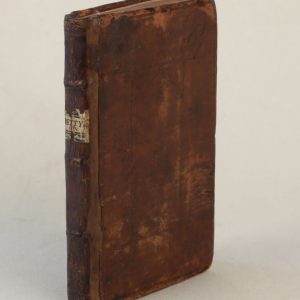 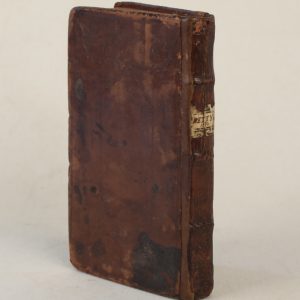 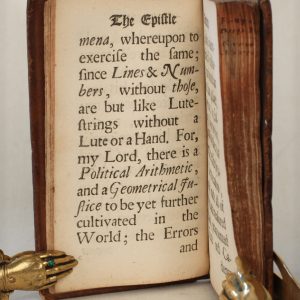 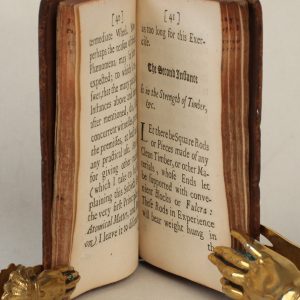 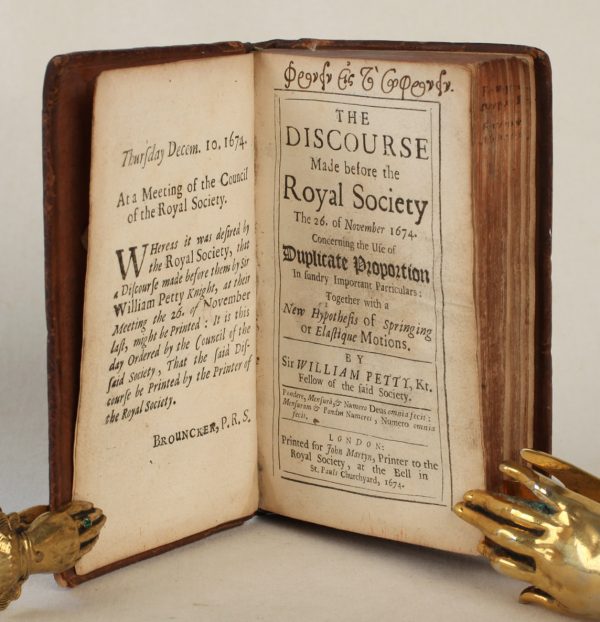 The Discourse made before the Royal Society the 26. of November 1674. Concerning the Use of Duplicate Proportion in sundry important particulars: together with a new hypothesis of springing or elastique motions.

FIRST EDITION. Read at a meeting of the Royal Society, this remarkable and far-seeing little book is a cry for the scientific use of mathematics and the application of mathematics to human affairs, written ‘in a way which the meanest Member of adult Mankind is capable of understanding’ (p. viii). Actually two works in one, the first is concerned with the quadratic relationship which was proposed by Galileo to determine the flexure of a beam such that flexural resistance is proportional to the width of the section, to the square of its depth and inversely to its length. He also gives a discussion of models and modelling theory and its application to the size of ships and their sails, which again owes its allegiance to Galileo who discussed model theory in the first day of the Discorsi. Petty then applies ‘duplicate proportion’ to determine the power of mills and pumps, the distance that sounds may be heard, smells detected and objects seen, the price of commodities, and on pp. 82–88, “The Life of Man, and its Duration.” This is the first of Petty’s books in which he uses the term “political arithmetic” (on p. xx). In the second part Petty discusses the nature of elastic bodies. “Noteworthy as the first English hypothesis regarding elasticity and the nature of elastic bodies, in it he proposes that matter is composed of corpuscules which were then made up of atoms. The atoms were held to have both magnetic properties and sexual characteristics” (M. Purver, The Royal Society: concept and creation, Cambridge, 1967, pp. 157–158, quoted by Roberts & Trent). Wing P1919. Keynes 16. Roberts & Trent, Bibliotheca mechanica, pp. 250–251. See also DSB, 10, p. 565b. This was the only edition.