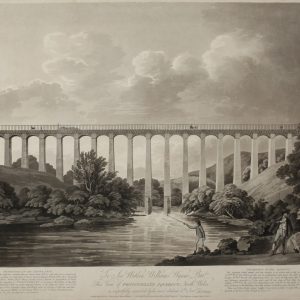 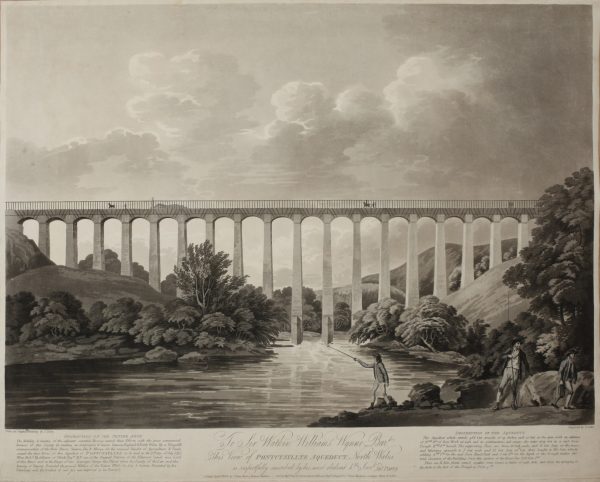 “Telford's engineering career developed from 1793 on his appointment as ‘General Agent, Surveyor, Engineer, Architect and Overlooker’ (Gibb, 28) to the important 68-mile Ellesmere Canal, joining the rivers Mersey, Dee, and Severn. The canal, now a thriving leisure facility, still makes use of many buildings and structures designed and built under Telford’s direction. The most remarkable is Pontcysyllte cast-iron aqueduct over the Dee, based on his embryo sketch design of March 1794, except for the piers, but not developed until after the iron trough concept had been proved operationally at Longdon-on-Tern aqueduct on the Shrewsbury Canal in 1795–6. At Pontcysyllte, with the support and approval of William Jessop, Telford deviated from traditional bulky masonry construction by building eighteen upright masonry piers and forming nineteen arches with cast-iron ribs supporting an iron trough with 1 in. thick sides, 1007 ft. long and 126 ft. high. The ironwork was made and erected by William Hazledine, the masonry was built by John Simpson, and the whole supervised by Matthew Davidson. The result, the supreme engineering achievement of the canal age, was still in service in 2003. Sir Walter Scott thought it ‘the most impressive work of art he had ever seen’ (ibid., 35) (ODNB). It is still the longest navigable aqueduct in Britain. Skempton does not list any work on the Pontcysyllte aqueduct. This fine and large engraving is probably therefore the first and best contemporary illustration of this pioneering structure. It includes a summary of the construction details in the lower right corner.