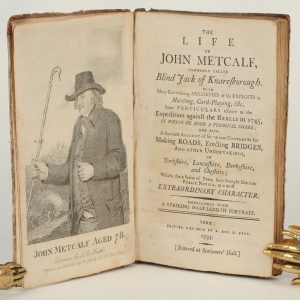 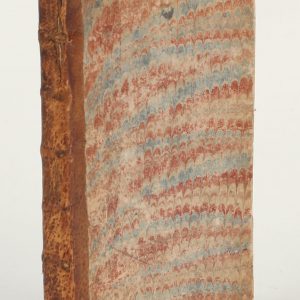 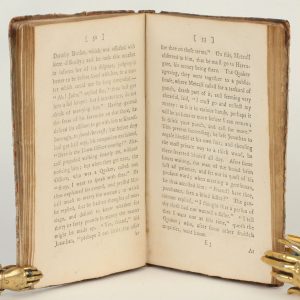 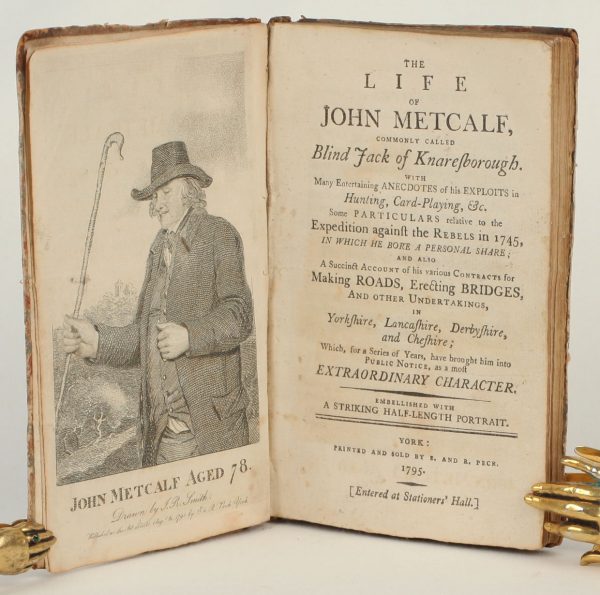 The life of John Metcalf, commonly called Blind Jack of Knaresborough. With many entertaining anecdotes of his exploits… and also a succinct account of his various contracts for making roads, erecting bridges, and other undertakings, in Yorkshire, Lancashire, Derbyshire, and Cheshire; which, for a series of years, have brought him into public notice, as a most extraordinary character…

FIRST EDITION. John Metcalf (1717–1810) was the first professional road builder to emerge during the Industrial Revolution. Blind from the age of six, he had a varied and adventurous career until, in 1752, the first Turnpike Act in his locality authorised a route between Boroughbridge and Harrogate. “Metcalf approached Thomas Ostler, the surveyor, and contracted to build a 3-mile section, which he successfully completed ahead of schedule. As a consequence of the high quality of his work and of his novel ideas of construction, he was awarded the contract to build a bridge at Boroughbridge. Despite obstruction from his competitors he completed the bridge successfully and by August 1754 had received over £500 for his work… His next major contract was a 6-mile stretch between Harrogate and Harewood, near Leeds, for which he received £1200. As Metcalf's reputation grew he was awarded contracts in other parts of Yorkshire and, subsequently, in Lancashire, Derbyshire, and Cheshire. A contemporary noted that Metcalf was 'a projector and surveyor of highways in difficult and mountainous parts' using only his staff as a guide. “Metcalf frequently undertook projects that other people refused and managed to complete all his contracts, though on occasions he lost financially. In order to deal with marshy areas he devised a method of laying heather and gorse as the foundation and building the road on top. This proved very successful and in many places enabled a more direct route to be taken. He built several stretches of moorland road linking Yorkshire and Lancashire and altered many routes in the Peak District. Metcalf was meticulous in his surveys and was so convinced as to the correctness of his routes and methods that for a new Pennine road over Pule and Standish common he offered to bear the cost if his scheme was not successful. He used his heather and gorse remedy and employed 400 men for the 9-mile stretch. Metcalf proudly notes that this section of road required no repairs for twelve years…” (ODNB). In the course of his career between 1752 and 1792 Metcalf constructed over 120 miles of high-quality road. “He attributed his success to his excellent memory for detail, which had developed as a result of his blindness. He made a valuable contribution to communications in the late eighteenth century by improving routes and thus enabling wheeled vehicles to move more easily in the critical period of rapid industrial expansion” (ibid). Reprinted many times in the early 19th century, this is the only 18th century edition; issue with the imprint as above, not recorded by ESTC. Skempton et al, Biographical dictionary of civil engineers, I, pp. 441–442.