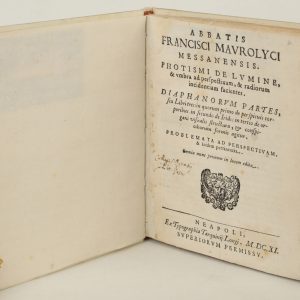 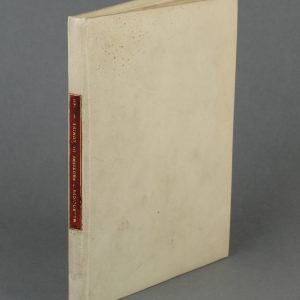 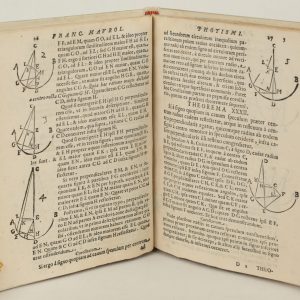 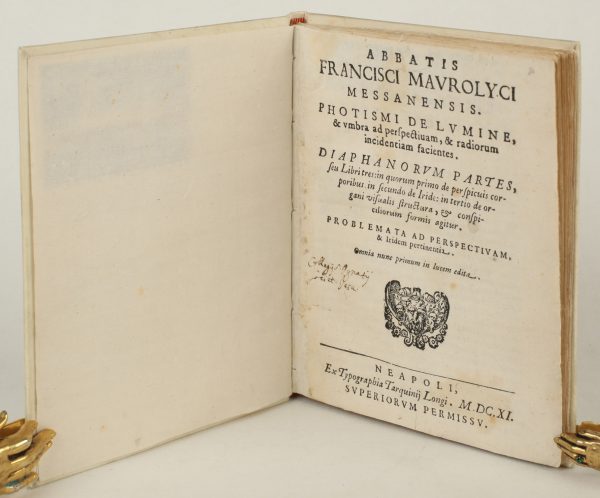 4to, pp. (vii), 84. Numerous woodcut diagrams and one woodcut illustration of the anatomy of the eye in the text. C1 and C4 are cancels, and in this copy these two leaves are bound in after the complete gathering C which retains the two cancellands. Neat repairs to inner margin of title and upper inner corner of first 4 leaves, neat repair to tear in fore-edge margin of D4. Modern vellum, brown morocco label on spine. Inscription of the Jesuit college of St. Ignatius on title; bookplate of David L. DiLaura

FIRST EDITION of the most important work on optics of the sixteenth century. Edited by Cristoforo Clavio, the work’s publication some 35 years after Maurolico’s death was occasioned in part by Galileo’s discoveries concerning the telescope in 1610. It is extremely rare. “The greatest part of his Photismi was already written by 1554, and the whole work was completed at the end of 1567, that is, before the publication of Alhazen’s Opticae thesaurus. It does not follow that Maurolyco was not acquainted with Alhazen’s book, because he might have read a manuscript of it, or the Alhazen tradition might have reached him indirectly. However, his own Photismi was very different: it was composed in the Greek mathematical style with which he was familiar. Its full title describes its contents: ‘Light concerning Light, consisting of a Chapter on Shadows & Reflection followed by Three Books on Refraction of which the first deals with transparent bodies, the second with the rainbow, the third with the structure of the human eye and the forms of spectacles’. “Maurolycus’ Photismi may have been the best optical book of the Renaissance, but as it remained unpublished it could not exert any influence before 1611” (Sarton, p. 85). “Maurolico [1494–1575] did important work in optics; indeed, according to Libri, ‘it is in his research on optics, above all, that Maurolico showed the most sagacity’ (Histoire, III, 116). The chief record of this research is Photismi de Lumine et Umbra, in which Maurolico discussed the rainbow, the theory of vision, the effects of lenses, the principal phenomena of dioptrics and catoptrics, radiant heat, photometry, and caustics. Maurolico’s work on caustics was anticipated by that of Leonardo da Vinci (as was his research on centers of gravity), but Leonardo’s work was not published until long after Maurolico’s. Libri further characterized the Photismi de lumine et umbra as ‘full of curious facts and ingenious research’, and Sarton suggested that it might be the most remarkable optical treatise of the sixteenth century outside the tradition of Alhazen, or even the best optical book of the Renaissance (Six Wings, 84, 85).” The two cancelled leaves, present here in two quite different states of text and illustration, were unknown until seen in this copy. During the printing Clavio changed his mind about the clarity of the text and diagrams accompanying Maurolyco’s explanation of the pinhole camera, which is the earliest such explanation. DiLaura, Bibliotheca Opticoria, 57. Sarton, Six Wings: Men of Science in the Renaissance, pp. 84–85. Vasco Ronchi, Optics, the science of vision, pp. 39–40. Lindberg, Theories of Vision from Al-Kindi to Kepler, pp. 178–182. Henry Crew (trans.), The Photismi de Lumine of Maurolycus. A Chapter in Late Medieval Optics. Wolf, History of Science, Technology, &c. in the XVIth and XVIIth Centuries, pp. 245–248, showed that Maurolico’s work on optics anticipated that of Kepler in some respects. Riccardi, I, 142 (the 1575 edition that he cites is a ghost.)