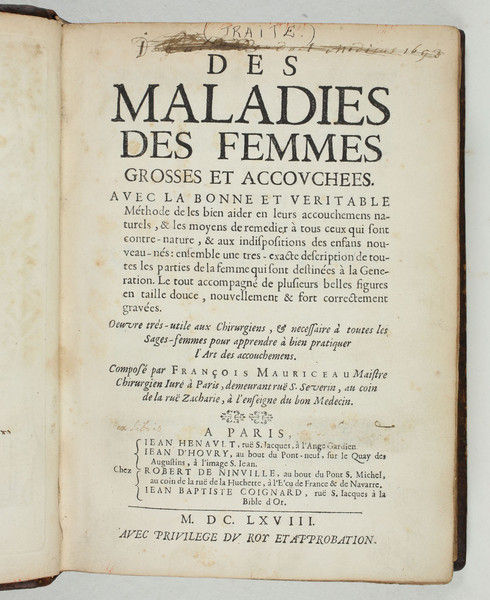 4to, pp. (xxiv), 536, engraved title by Vallet after Paillet incorporating a portrait of the author. Woodcut headpieces and initials, and 30 engravings in the text (some full-page). Name erased from blank areas of engraved and printed titles, paper slightly browned and a few small marks. Contemporary mottled calf, nicely rebacked and tips of corners repaired. Ownership inscription dated 1693 at head of title deleted.

FIRST EDITION of the book which “established obstetrics as a science” (G&M). This was the outstanding textbook of the time, the first important textbook of obstetrics for nearly sixty years (since that of Jacques Guillemeau in 1609), and the first important obstetrical text to be published in five vernacular languages as well as Latin. “While much in Mauriceau’s treatise echoed the teachings of his predecessors, the work also included several important new features, such as Mauriceau’s detailed analysis of the mechanism of labor, his introduction of the practice of delivering women in bed rather than in the obstetric chair, the earliest account of the prevention of congenital syphilis by antisyphilitic treatment during pregnancy, and the rebuttal of Paré’s erroneous account of pubic separation during birth” (Norman). The original illustrations, many signed “du Cerceau”, who was a junior member of a famous family of architects and artists, set a new trend in obstetric illustration. G&M 6147. Grolier One Hundred (Medicine), 33. Lilly, Notable Medical Books, p. 85. Norman catalogue 1461. Radcliffe, Milestones in Midwifery, pp. 23–26. Speert, Milestones, pp. 558–566. Cutter & Viets pp. 77–81.