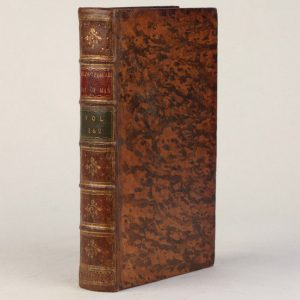 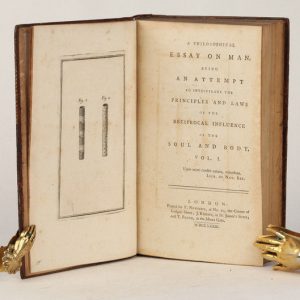 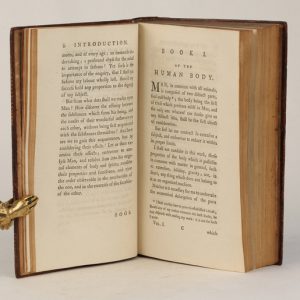 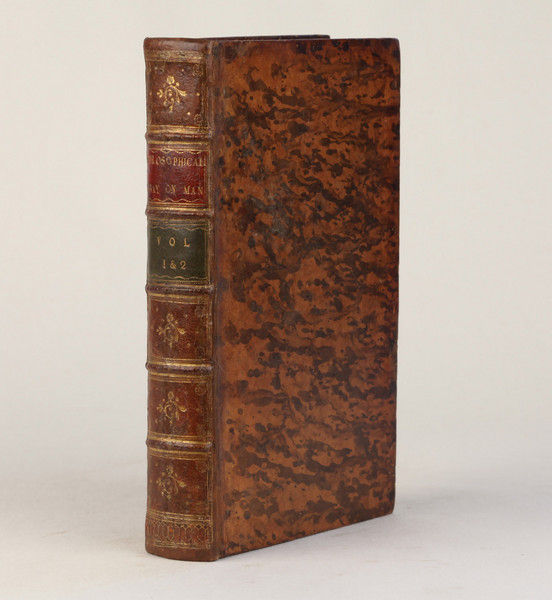 A Philosophical Essay on Man. Being an attempt to investigate the principles and laws of the reciprocal influence of the soul and body.

FIRST EDITION of Marat’s first substantial book (a greatly expanded version of his Essay on the Human Soul (1772). Highly ambitious but without patronage or qualifications, Marat saw this book as his first ticket into intellectual society. His next was The Chains of Slavery (1774), before moving to Paris in 1776. “In true Cartesian fashion he treats the human body as the machine serving as the organ of the soul. The work is divided into four sections. The first is purely anatomical. The second treats of the human soul…[and] contains a vigorous and detailed polemic with Helvétius, who, as is well known, would derive the passions from the system of physical sensations. It is the task of the third section, which is divided into two parts, to deal respectively with the modifying influence of the bodily machine on the indwelling soul and of the soul upon the physical mechanism. In this section the phenomena of sleep and dreaming are expatiated upon, as illustrating the author’s theses… The fourth section of the book deals with the causes and modus operandi of the influence of body and soul on each other,…through…what he terms the “nervous fluids”, by which he understands a subtle ether or substance, “neither grossly material, like the body, nor purely immaterial, like the soul”, but occupying a position between the two, which is the vivifying power of living nerve-substance, and which is concentrated in its greatest intensity in the brain. The movements of this mysterious fluid combine with the elasticity of the fibres and the physical quality of the various organs affected, upon which moral and physical peculiarities depend” (Ernest Belfort Bax, Jean-Paul Marat, The people’s friend). There were two issues in 1773, one without, and one with (as here), Newbery’s name in the imprint. Both are extremely rare on the market.