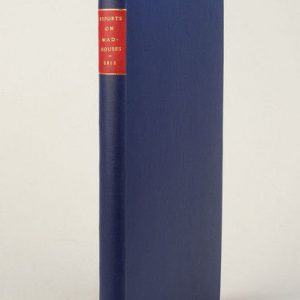 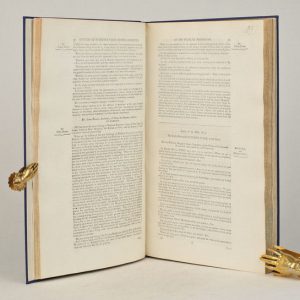 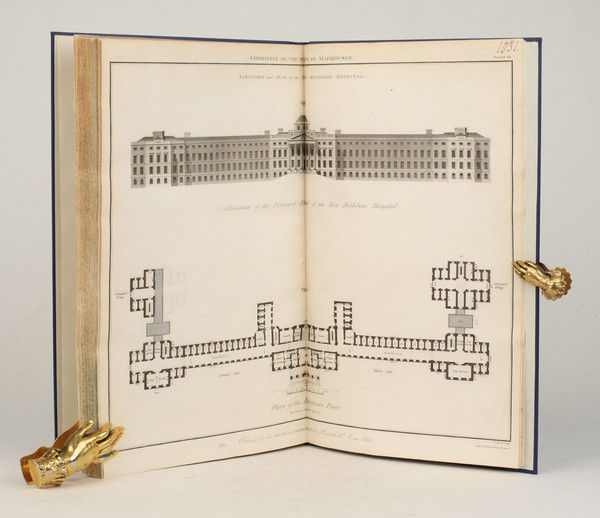 Report [-Fourth Report] from the Committee on Madhouses in England.

Folio, pp. 7, (1), 214, + subtitles to each of the four Reports, and 8 engraved plates (6 double-page) of designs for the West Riding, Bethlem, and other asylums. Recently bound in blue cloth, red morocco label on spine, fine copy.

FIRST EDITION of the four Reports for 1815, one of the most important documents in the history of psychiatry, bringing the distressing circumstances of the insane in asylums to public attention. There were four Reports in 1815 and a further three in 1816. The actual Report comprises the first 7 pages; the four Reports themselves consist of the Minutes of Evidence. The Reports for 1815 were the most significant, as those for 1816 merely confirmed their findings and took further evidence. “Together they were a survey of the conditions and treatment of the insane wherever they were confined... A revelation to all but a few when they appeared, they are today a historical source of the first importance containing information nowhere else to be found about how the insane actually fared as opposed to what was written about insanity in books, a disparity between theory and practice which emerges glaringly. Next to them the two earlier Parliamentary enquiries...appear almost insignificant. In contrast the 1815 [&] 1816 Committees’ Minutes of Evidence is a monumental documentary...with plans of asylums, covering all aspects of asylum life...” (Hunter & Macalpine, pp. 696–703). This is the true first edition of the official government report, and as such extremely hard to find. It was republished in 1815 on the initiative of one of the witnesses, and reprinted by order of Parliament in 1819.