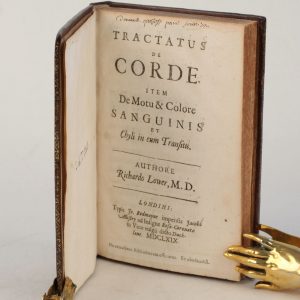 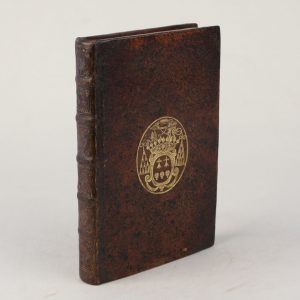 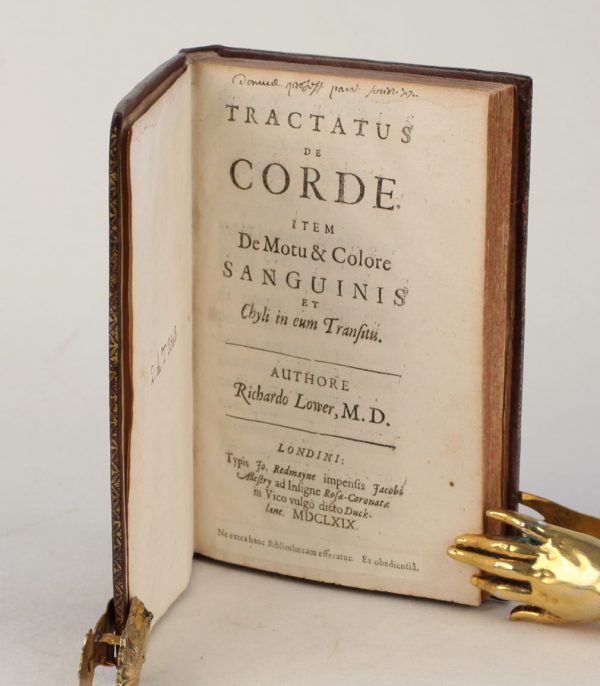 FIRST EDITION, second issue (see below) of “the most important contribution to circulatory physiology after William Harvey’s De motu cordis, published three years before Lower’s birth. Nobel Laureate André Cournand considered Lower’s book to be one of the most important texts in the history of physiology because of the nature of its observations, the rigor of its experimental design and demonstrations, and its simple and convincing form of presentation… “Lower entered medical practice in London in 1666 and continued experiments he had begun in Oxford on the motion and color of the blood and on transfusion. His observations on these subjects were summarized in Tractatus de corde. “Lower made important observations on the structure of cardiac muscle, the quantity of blood in the vascular system, the velocity of blood flow, and the effects of aeration of blood as it passed through the lungs. He was impressed by the complex arrangement of muscular fibers in the heart and felt their unique arrangement was responsible for the contraction of the ventricular cavities in systole that propelled blood into the vascular system. In a series of experiments performed with Robert Hooke, Lower showed that the red color of arterial blood was due to its contact with ‘fresh air’ in the lungs. His book also contained observations on the technique and safety of blood transfusion, a technique he pioneered” (W. Bruce Fye in Grolier One Hundred (Medicine). There are two issues: in the second issue, the original leaf A6 has been replaced by a cancellans in order (according to John F. Fulton) to “modify (very slightly) a scurrilous remark…concerning the Irishman O’Meara” (ibid). Provenance: arms on the covers of Daniel Huet (1630–1720), Bishop of Avranches and celebrated anti-Cartesian; engraved bookplate with his arms commemorating his living donation of his library in 1692 to the Jesuit order in Paris on front pastedown; donation inscription confirming the same on the title; manuscript and printed shelfmarks. Huet was a celebrated scholar and author, whose library of books and manuscripts was later purchased by the King for the Royal Library. Wing L3310. G&M 761. Printing and the Mind of Man 149. Grolier One Hundred (Medicine) 34. Fulton, Two Oxford Physiologists, 4.