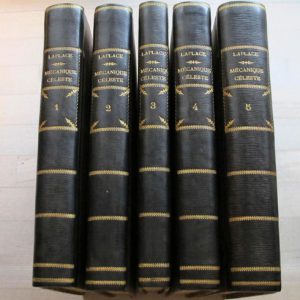 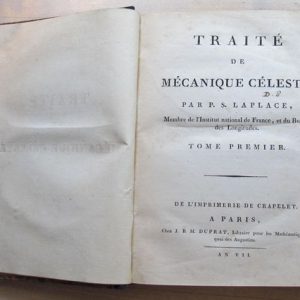 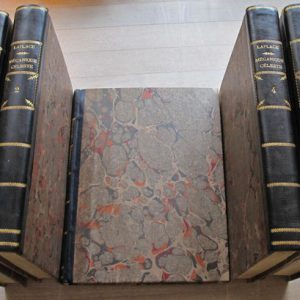 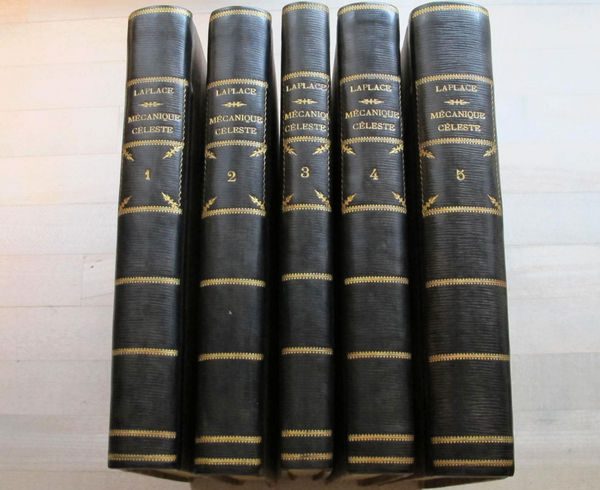 FIRST EDITION, and a set complete with all the supplements. In this monumental and fundamental astronomical work, Laplace — the “Newton of France” — codified and developed the theories and achievements of Newton, Euler, d’Alembert, and Lagrange. “Laplace maintained that while all planets revolve round the sun their eccentricities and the inclinations of their orbits to each other will always remain small. He also showed that all these irregularities in movements and positions in the heavens were self-correcting, so that the whole solar system appeared to be mechanically stable. He showed that the universe was really a great self-regulating machine and the whole solar system could continue on its existing plan for an immense period of time. This was a long step forward from the Newtonian uncertainties in this respect... Laplace also offered a brilliant explanation of the secular inequalities of the mean motion of the moon about the earth — a problem which Euler and Lagrange had failed to solve... He also investigated the theory of the tides and calculated from them the mass of the moon” (Printing & the Mind of Man). A very nice set, with the first state of the titles of Vols. I and II and all the supplements. It lacks the title leaf for the first supplement in Vol. IV and the half-title and title leaf for the second supplement of the same volume (the number of these part-titles varies from copy to copy; see the note in the Norman catalogue). Printing & the Mind of Man 252. Dibner, Heralds of Science, 14. DSB, XV, pp. 273-403. En Français dans le Texte 201. Horblit 63. Roberts & Trent, Bibliotheca Mechanica, pp. 197–198. Norman catalogue 1277.