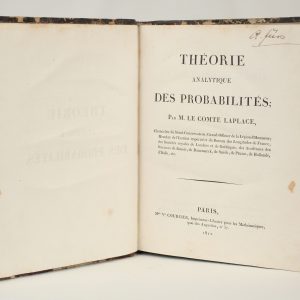 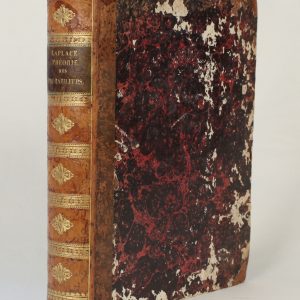 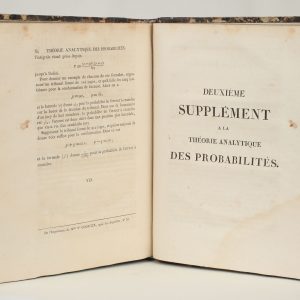 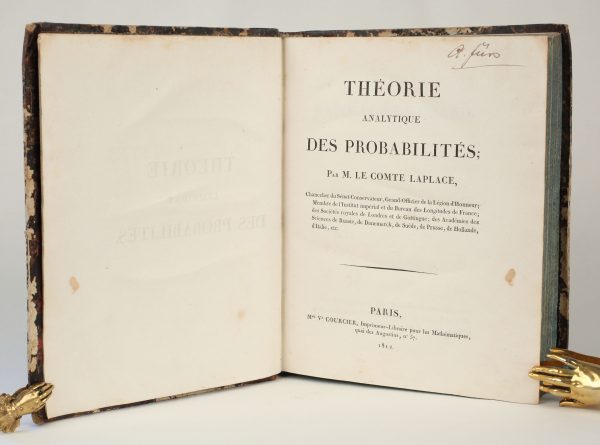 4to, 5 leaves, pp. cvi, 506, (2) errata, 34 (first supplement), 50 (second supplement). The first leaf of each supplement is a sub-title. Pale dampstain in lower corner throughout but barely noticeable except for the last few leaves, some mild foxing and small marks. Nineteenth century half calf, flat spine gilt with green morocco label, marbled sides (but some of the surface of both boards eroded by insects, edges and tips of corners worn), marbled endpapers, blue edges. Signature of A. Jürs(?) in upper corner of title.

Second edition of 1814, and an interesting copy. Firstly this copy has the half-title, title, dedication and errata of the first edition, but the rest of the copy is of the second edition, something I cannot recall ever having seen before in any book. In addition to the four leaves just mentioned, the fifth preliminary leaf is the “Avertissement sur cette seconde édition”. Secondly this edition has numerous cancelled leaves, but in this copy three cancellands have been left in even though the cancels are also present. The first is pp. 303/304, and the second are pp. 445–448, which show that the book originally ended on page 445, followed by the contents leaves, but Laplace added another 39 pages as the text actually ends on page 484, followed by the contents leaves. The final leaf is the errata, the last erratum being for p. 441. Laplace’s book is of the greatest importance in the science of probability. The first part is on the mathematical theory of probability, and the second on its application to games of chance, the causes of events, demography, life expectancy, etc. In this second edition are two major additions, the Essai philosophique sur les probabilités which forms the 106-page introduction, and the probability of testimony (pp. 446 et seq., see above), a subject which Laplace continued in the second part of the first supplement, where he is concerned that a juror will not be mistaken in arriving at a verdict of guilt. In the second supplement Laplace turned to geodesy, a discussion that Stigler [The History of Statistics] considers as containing “the earliest instance of a comparison of two well-elaborated methods of estimation for a general population” (DSB, 15, p. 376; see pp. 367–376 for a full discussion). While the first and third editions are regularly offered for sale, the second seems to be exceptionally rare, with no copy traced for sale anywhere except for two copies offered by Quaritch in 1988 and 1993, also with two supplements. See Heyde & Seneta, I.J. Bienaymé, statistical theory anticipated, pp. 30–31 and Parkinson, Breakthroughs, 1812. Westergaard, Contributions to the history of statistics, pp. 82–83 and 109–111.