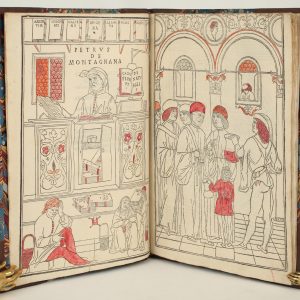 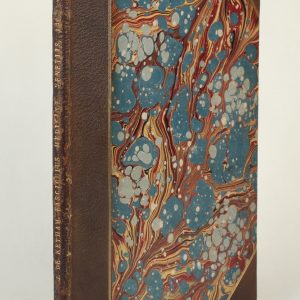 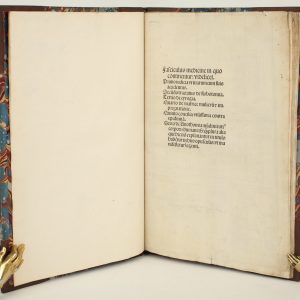 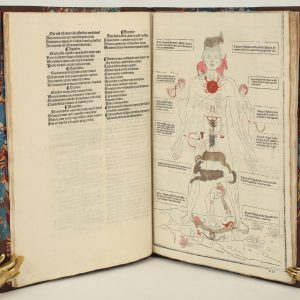 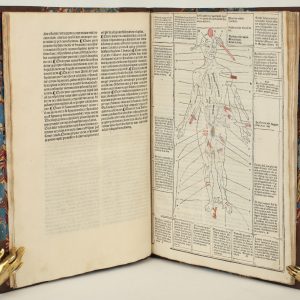 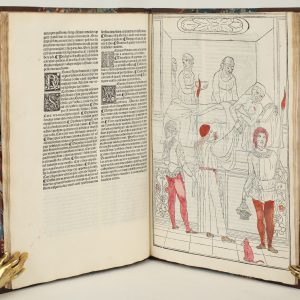 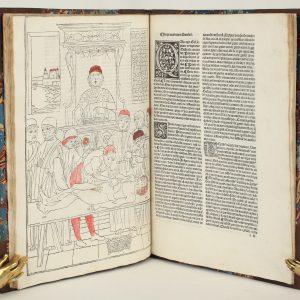 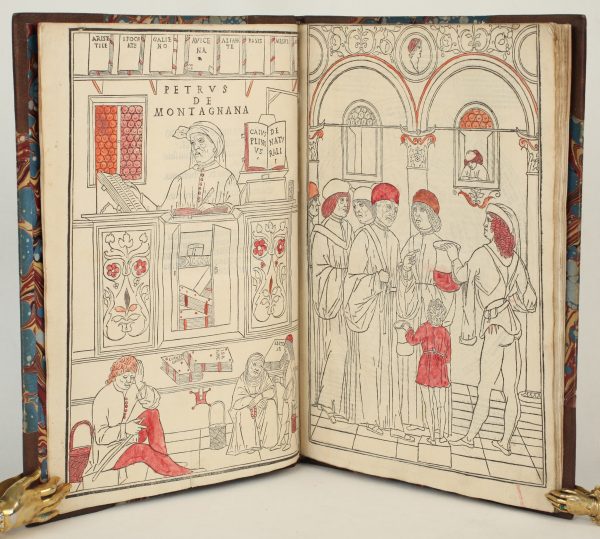 Small folio (312 x 213 mm.), 40 unnumbered leaves. With 10 full-page woodcuts, woodcut initials (including 8 coloured in red), text in double columns, 53 lines. Eight of the cuts are partially coloured in red and in one case also in brown by a contemporary hand; in the six woodcuts showing a naked figure the sexual organs have been coloured in grey ink (possibly at the time of binding). Some contemporary manuscript marginal notes in a very small hand. Pale brown stain in fore-edge margin of g1 and g4, ruled borders of 8 of the woodcuts shaved along the upper edge (as in other copies), but a fine and large copy with no markings and no repairs or restoration. Bound in brown half morocco with marbled sides and endpapers in the 19th century, probably for the Royal Academy. Provenance: The Royal Academy of Arts, with their initials at foot of spine; sold at Sotheby’s on 14th June 1966; private collection.

Second Latin edition (the sixth edition chronologically including three Spanish editions), and a fine and large copy of the first printed medical book to be illustrated with realistic figures, in particular, anatomical illustrations. This is the first edition that is obtainable for practical purposes: in the last hundred years no copy of a Spanish edition is recorded in the most comprehensive online database as being sold, only one copy (lacking one leaf) of the 1491 edition, and four of the 1493 edition, of which one was imperfect and two were from the collection of Dr. Otto Schäfer. The Fasciculus Medicinae is a collection of medical texts, some medieval but none of them classical or Arabic, first printed in 1491. In the Italian translation of 1493 “it underwent changes sufficiently significant to make it into what Dr. Singer has called the first modern medical book imbued with humanist spirit — perhaps a rather ambitious statement” (PMM). The woodcuts were dramatically improved, and it contained additional illustrations and, most notably, the anatomical text of Mundinus. The present edition contains six treatises, on urology, flebotomy, surgery, gynæcology, and epidemiology (the Consilium pro peste evitanda of PETRUS DE TUSSIGNANO). The sixth book is on anatomy, the Anathomia of MUNDINUS, which was the first monograph on anatomy to appear in print and the only book on the subject during the fifteenth century. Of the ten woodcuts in this edition, the first eight appeared in the 1493 edition, one (depicting the sick room of a man with the plague) is a close copy from that edition, and one (the dissection scene) is new. Two of the cuts are urological, one astrological, one medical, one is the often repeated ‘wound man’, one a bloodletting scene, and one shows the female internal organs. The cut on the first page of the book shows the Paduan physician Petrus de Montagnana teaching; the library surrounding him is composed entirely of classical and Arabic works. The new cut shows Mundinus lecturing while a male cadaver is dissected, and accompanies Mundinus’s work on anatomy because he re-introduced dissection, which had been neglected for 1500 years before him. These illustrations are of quite extraordinary quality, especially bearing in mind that they had no precedent in a medical book. They were designed by an artist of the first rank, attributed to the school of Gentile Bellini (1429–1507), the presiding genii of late Gothic and early Renaissance Venice. They elevate the book into the ranks of finely illustrated incunabula, and give it an interest far beyond the world of medicine. The so-called ‘author’ was Johannes von Kirchheim, to whom the work was in all probability attributed by its Italian printers, who in doing so corrupted his name to Ketham. Kirchheim, born in Swabia, was professor of medicine in Vienna in about 1460. There were 14 printed editions up to 1523, “but the influence of the book, particularly through its illustrations, long outlived them” (PMM). Klebs 573.2. Hain *9775. BMC V, 351. Choulant, Handbuch, pp. 402–405 (unaware of the Spanish editions). Choulant pp. 115–122. Herrlinger pp. 28–29 & 65–66. Norman catalogue 1211. Dyson Perrins, Italian Book-illustration and Early Printing, 96. See G&M 363 and 363.1, Printing and the Mind of Man 36, Grolier One Hundred (Medicine) 10A, and Stillwell, The Awakening Interest in Science, III 436 and IV 667 (1491 edition).