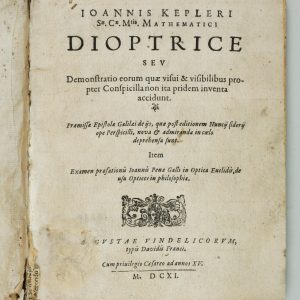 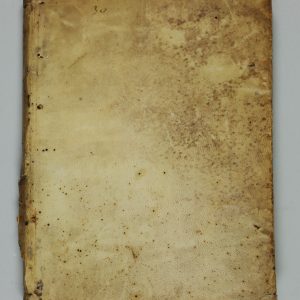 4to, 4 leaves, pp. 28, 26, 2 leaves, pp. 27–80. The two leaves between pp. 26 and 27 are normally bound at the end but are bound here before p. 27 to which the text of the first leaf refers. Woodcut diagrams in the text. Old repair to title with loss of 2 letters of imprint, diminishing wormtrack in upper inner corner of first few leaves and in lower margin of gatherings B–D, dampstain in first 28 pages and a few leaves browned, inkstain on second p. 9, some other small marks and light foxing. Contemporary limp vellum (a bit soiled, spine torn, front endpapers creased and damaged). Stamp of Dr. Mario E. Spada on front pastedown.

FIRST EDITION. The foundation work of modern optics and the earliest complete anaylsis of dioptrics. In 1610, Kepler was presented with a telescope, the gift of Ernest, Archbishop of Cologne, to whom the Dioptrice is dedicated. “With the energy peculiar to him, inside of a few weeks…[Kepler] composed a book tracing basically once and for all the laws governing the passage of light through lenses and systems of lenses. It is called Dioptrice, a word which Kepler himself coined and introduced into optics. The substance of this book has since become the common property of science and the possession, as a matter of course, of everyone who has examined optical questions to any extent. All the schematic figures, well known from physics textbooks, are found there…” (Caspar, Kepler. Trans. C. Doris Hellman [1959], pp. 198–199). Kepler discovered total reflection and described for the first time spherical aberration and how it could be overcome by giving optical surfaces hyperboloidal forms. He showed, also for the first time, that an image must be sharply focused on the retina to be seen distinctly, a theory in contrast to some of his contemporaries who still believed the Euclidean idea that light proceed from the eye to the object. He presented the ideas of the real and virtual image, the upright and inverted image, and the magnification or reduction of the image. In Problem 86 “he develops the principle on which the so-called astronomical telescope is based, the discovery of which is thus tied up with his name for all time” (ibid.) Kepler’s telescope consisted of two convex lenses, as opposed to Galileo’s which had one concave and one convex lens. Written as a direct result of Galileo’s Siderius Nuncius (1610), the book contains a long preface by Kepler in which he publishes the latest discoveries made by Galileo with the telescope, including the observation that Saturn does not appear as a simple disc (famously encoded by Galileo as an anagram), and that Venus has phases. “Even this scanty account of the main content shows the epoch-making significance of the work. It is not an overstatement to call Kepler the father of modern optics because of it” (ibid.) DiLaura, Bibliotheca Opticoria, 56. Caspar, Bibliographia Kepleriana, 40. Cinti, Biblioteca Galileiana, 31. See also King, The History of the Telescope, pp. 44–45.