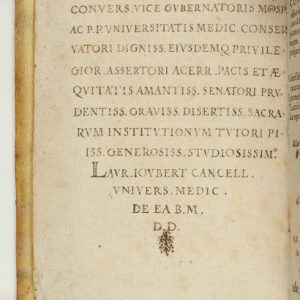 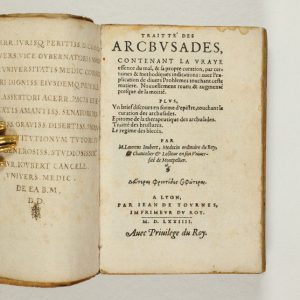 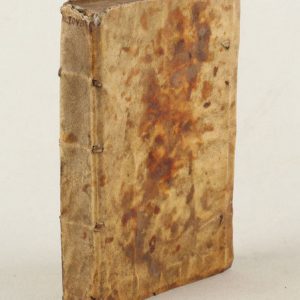 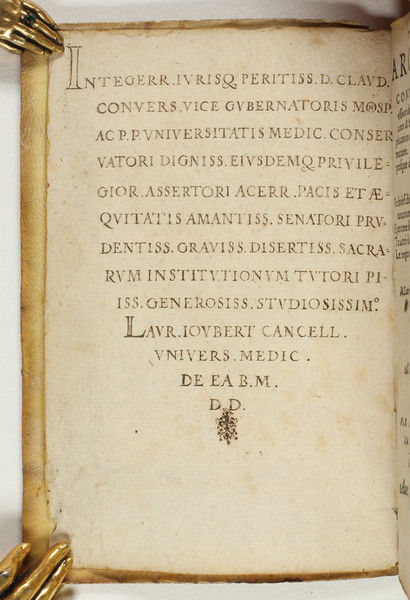 FIRST COMPLETE EDITION (the second chronologically) of this rare monograph on one of the two great problems of Renaissance surgery, the treatment of wounds by firearms (the other was epidemic syphilis). As Joubert says on the title-page, this edition is greatly expanded with several new sections from the first of 1570, which had 132 pages. The third of the new sections is on burns. Joubert was a distinguished physician of Montpellier, professor of medicine in the university and dean of the faculty. He served in the royal army in the campaign of 1569. He was to within a few years an exact contemporary of Paré, but although Paré’s book on the same subject had been published nearly thirty years earlier, Joubert makes no mention of him. The wonderful presentation inscription from the author in this copy is so unusual in a book of this kind. It is to Joubert’s close friend Claude Formy (”Claude the converted”), a fellow convert to Protestantism, physician, and leader of the Reformation in Montpellier. The two collaborated on a biography of Guillaume Rondelet, who was Joubert’s teacher and Formy’s cousin. Very rare; for instance Wellcome has the first but not this second edition, Durling (2635) has this edition (possibly incomplete at the beginning) but not the first (although it is now in the online catalogue). Three copies are located in the USA, and 1 in the UK. It is not in the Bibliothèque Nationale.