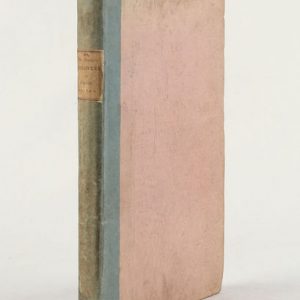 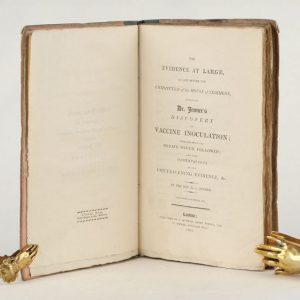 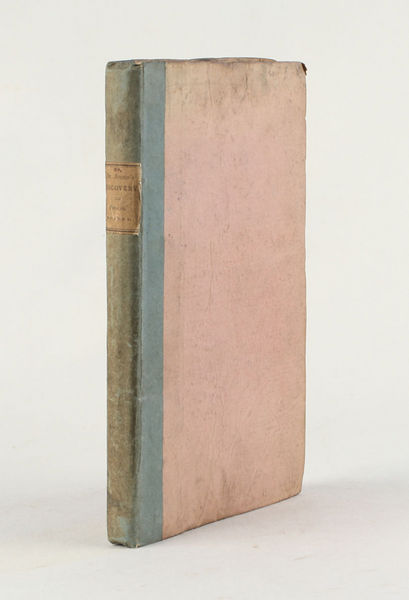 The Evidence at Large, as laid before the Committee of the House of Commons, respecting Dr. Jenner’s discovery of Vaccine Inoculation; together with the debate which followed; and some observations on the contravening evidence, &c.

FIRST EDITION. Edited by Jenner’s nephew George, the Evidence is an important document in the history of vaccination. Jenner had petitioned Parliament on 17th March 1802 for recognition of his claim to the discovery of vaccination and for remuneration for the time he had spent on it. A special committee was appointed to consider the medical evidence, whose findings are reported in this book. Jenner was granted £10,000 in recognition of his expenses and achievements. “Addington, the Prime Minister, stated that the king recommended the petition, and it was referred to a committee which was to report on the usefulness of the discovery, Jenner’s right to be considered the discoverer, and the advantage he had derived from it. The committee took much evidence, the most important, after that of Jenner himself, being that of Dr. Matthew Baillie, who, after expressing his opinion as to the efficacy of vaccination, said: ‘If Dr. Jenner had not chosen openly and honourably to explain to the public all he knew upon the subject, he might have acquired a considerable fortune. In my opinion it is the most important discovery ever made in medicine’ ” (DNB). LeFanu 86 [69]. George Jenner, a qualified MD, was himself extremely active in vaccination, vaccinating 5000 people before 1805.