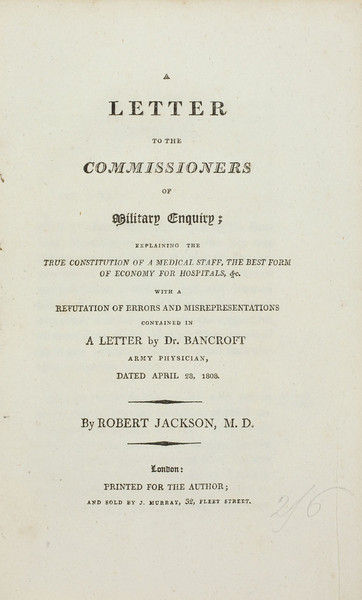 A Letter to the Commissioners of Military Enquiry; explaining the true constitution of a medical staff, the best form of economy for hospitals, &c. With a refutation of errors and misrepresentations contained in a letter by Dr. Bancroft, army physician, dated April 28, 1808.

SOLE EDITION. Jackson was a prominent army physician who made a lifelong study of fevers. This work addresses proposed changes in the army medical department, specifically in the distinctions between physician to the forces and regimental surgeon. The reference to Dr. Edward Bancroft is to his Letter to Commissioners of Military Enquiry: containing animadversions on some parts of their fifth report (1808), in which he stated his belief that the best army physicians could be drawn from civilian circles, not simply from the lower ranks of regimental surgeons. COPAC records 3 copies.