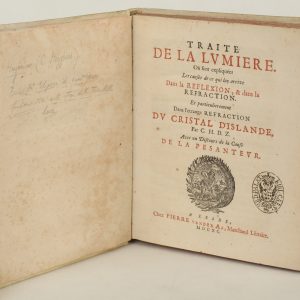 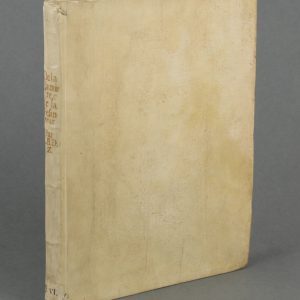 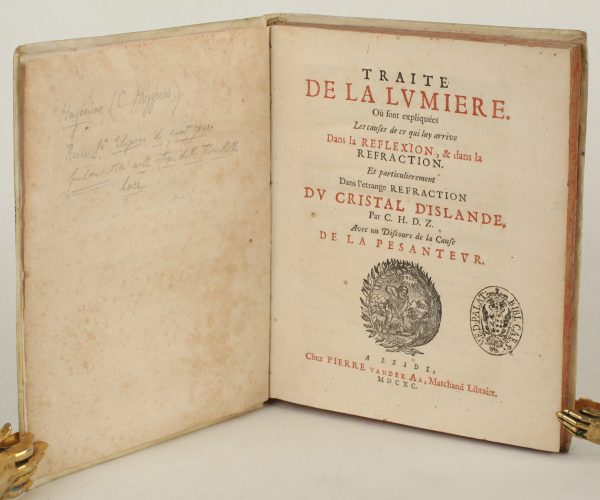 FIRST EDITION. One of the great classics in the literature of optics. In this book Huygens first established the wave or pulse theory of light, in opposition to the corpuscular theory advanced by Newton. He propounded what is now known as “Huygens’ principle” which enabled him to explain the reflection and refraction of light on the basis of his undulatory theory. Chapter V contains Huygens’ analysis of the double refraction which Erasmus Bartholin had observed in crystals of Iceland spar in 1670. He described the polarisation of light, but was unable to explain it. Huygens completed the Traité in 1678, but chose not to publish it until prompted to do so by the publication of Newton’s Principia in 1687 and by a meeting with Newton in June of 1689. Huygens’ work remained unaccepted and in opposition to Newton for over a century until Thomas Young used it to explain optical interference. Modern physicists fuse both theories. The second part of this book, Discours de la Cause de la Pesanteur, contains Huygens’ mechanical explanation of gravity. Horblit 54. Dibner 146. Evans, Epochal Achievements, 32. Parkinson, Breakthroughs, 1690. Sparrow, Milestones of Science, 111. DiLaura, Bibliotheca Opticoria, 198. Wolf, History of Science, I, pp. 260–264 (with several reproductions). Norman catalogue 1139. There are two issues of the title-page: one has the author’s initials only (as in the present copy), and the other has his name in full. No priority has been established, but the issue with his initials only is more likely to be the first.