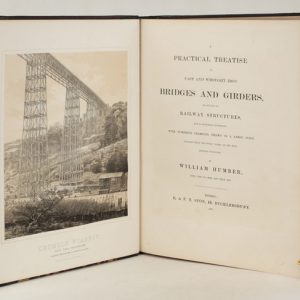 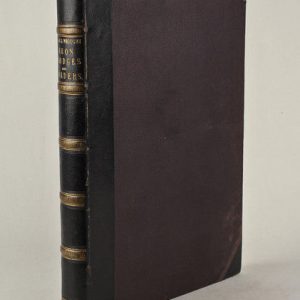 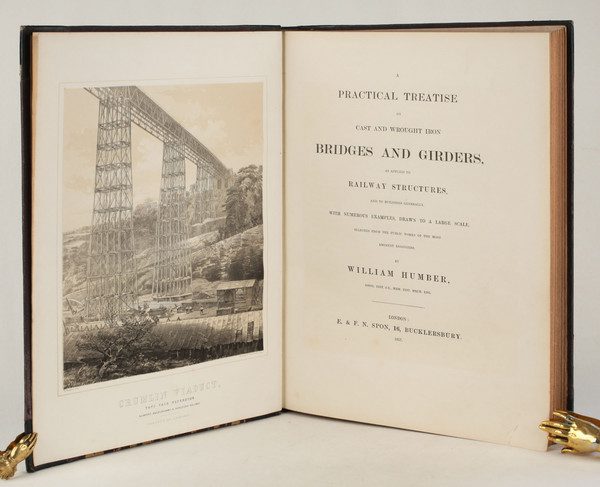 A Practical Treatise on Cast and Wrought Iron Bridges and Girders, as applied to railway structures, and to buildings generally, with numerous examples…

Large 4to, pp. x, 1 leaf, pp. 106, 1 leaf (errata), fine tinted lithographed frontispiece and 58 lithographed plates numbered 1–57 plus 36a (including 35 folding or double-page) all from drawings by the author. Half-title. Spotting on front and back fly-leaves with minor offsetting, otherwise a fine copy. Contemporary half morocco and pebbled cloth sides. Bookseller’s ticket of B.T. Batsford, Architectural and Engineering Bookseller, London.

FIRST EDITION of this superbly illustrated “survey of the iron bridges erected in the wake of the Britannia Tubular Bridge exploiting the increased knowledge of the material and its behaviour resulting from that monumental structure. Humber’s book is made up of a series of plates, each fully described, illustrating examples of all kinds of structures including aqueducts, viaducts and road bridges. A lengthy section is devoted to the Crumlin Viaduct (prototype for many bridges erected overseas), newly opened and built with Warren & Kennard’s patent triangular girder. Other structures include Joseph Cubitt’s bridges on the Great Northern Railway, a splendid tubular girder bridge on the Midland Great Western Railway in Ireland designed by Hemans and constructed by Fairbairn & Sons, Rendel’s Sursuttee Bridge on the East India Railway, Thomas Page’s Chelsea Bridge, and a final section on iron girders used for fire-proof floors” (Elton, Catalogue 15, 52). William Humber (1821–1881) was a consulting civil engineer principally engaged in surveying for railway lines and projecting water and drainage works. Later in his career he made extensive use of wrought iron as a roofing material. Roberts & Trent, Bibliotheca mechanica, p. 166.