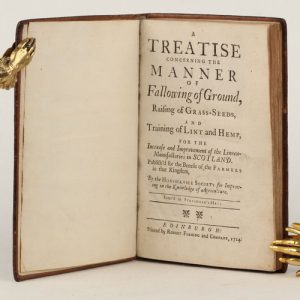 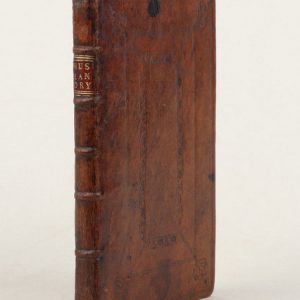 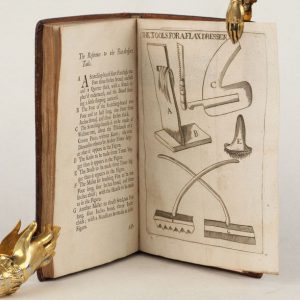 A Treatise concerning the Manner of Fallowing of Ground, Raising of Grass-Seeds, and Training of Lint and Hemp, for the increase and improvement of linnen-manufactories in Scotland. Publishe’d for the benefit of the farmers in that kingdom, by the Honourable Society for Improving in the Knowledge of Agriculture.

FIRST EDITION. The first book published by the Society of Improvers in the Knowledge of Agriculture in Scotland, which was the first agricultural society in Europe, formed in June 1723. This work is one of the earliest works on flax and hemp published in Scotland. It has been variously attributed to Richard Bradley and William Macintosh, but according to the ODNB it was largely the work of Hope, the first president of the society, aided by Robert Maxwell of Arkland, the secretary. The text incorporates (Chapters 5–8) the second edition of Louis Crommelin’s An essay towards the improving of the hempen and flaxen manufactures in the kingdom of Ireland (Dublin, 1705), which was one of the earliest, perhaps the first, Irish books on Irish industry. These four chapters are on hemp, spinning, linen, and bleaching, and contain many details of historical and scientific interest. The plates show details of various types of loom. Crommelin is described as ‘the founder of the linen-manufactory in Ireland, about the year 1700’. He was requested by the king to be director of the linen manufacture at Lisburn, where he brought in skilled Irish, French and Dutch workers, and ordered 1000 weaving looms. Fussell, The old English farming books, pp. 109–110, discussing the authorship. McDonald, Agricultural writers, p. 208. Henrey, British botanical and horticultural literature before 1800, II, pp. 603–605.