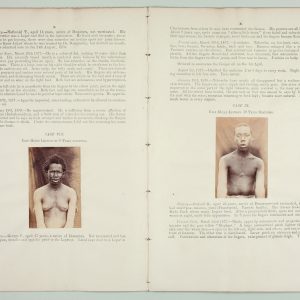 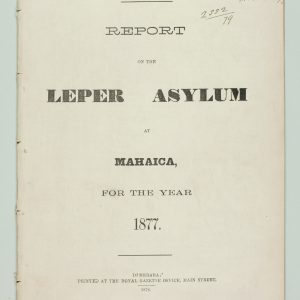 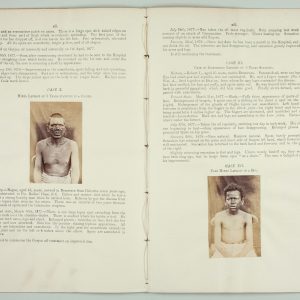 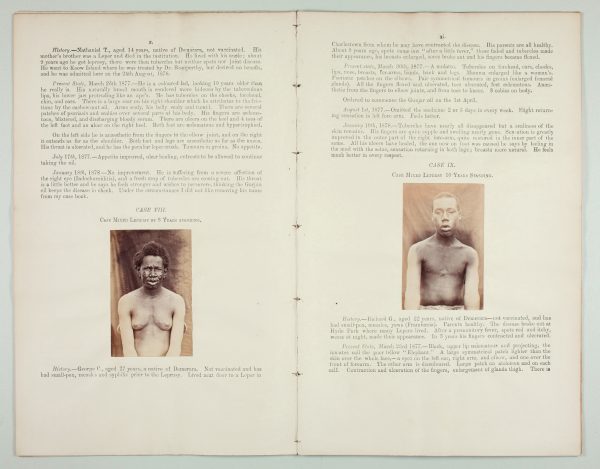 2 works together, folio, 8 pages; xxiv pages, with 13 (of 16) actual photographs pasted in. Disbound, with stab-stitch holes to gutters, final leaf of second work detached. Missing three photographs, but with no trace of them ever having been pasted in. Provenance: ownership inscription of G. Milroy, 21 March 1879 (?, last digit cropped) and manuscript numerals to title page of first work; Gavin Milroy (1805–1886) had a distinguished career as a medical officer with important overseas postings. His last government appointment was as medical commissioner to the West Indies in 1871–2. After returning to England, he served the Royal College of Physicians on its committee on leprosy and yaws.

FIRST EDITION of an apparently unrecorded report on the conditions of, and efficacy of treatments on, indigenous male patients at the Leper Asylum, Mahaica, British Guiana, illustrated by early sepia photographic portraits. The report was compiled by the visiting surgeon, John D. Hillis, who assumed charge of the Asylum on his appointment as District Medical Officer of Mahaica. His primary concern was to survey the efficacy of the use of antimicrobial decongesting oil in the treatment of those affected by leprosy. Of the 32 patients who received the treatment over the course of nine months, 16 showed a very great improvement, with one patient able to return to his family and eight having their symptoms ameliorated. “In one case the patient refused the medicine. 3 cases had to go into Hospital, one of whom died. 1 case became insane, and there were only two cases in which the oil had no appreciable effect on the disease.” Hillis concludes: 'I will…observe that in Gurjun Oil we appear to have a most valuable medicine for the treatment of Leprosy in all its forms…but whether this benefit will be transitory of whether the symptoms will return can only be learned by farther experience in its use and by recording the clinical progress of these and other cases at this Asylum and elsewhere” (p. xxiv). See G&M 13045, Hillis’s Leprosy in British Guiana. An account of West Indian Leprosy. Illustrated with twenty lithographic plates, coloured and plain, from original drawings and photographs of patients at the asylum (London, 1881). The present report was Hillis’s first as District Medical Officer. Not in COPAC.