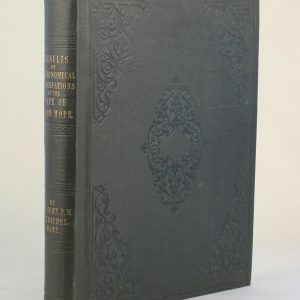 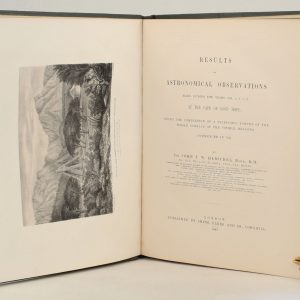 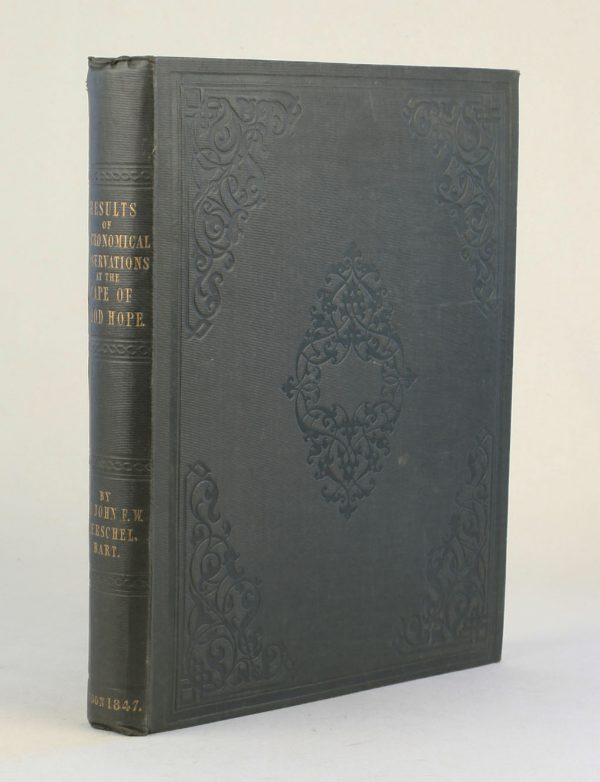 Results of Astronomical Observations made during the years 1834, 5, 6, 7, 8, at the Cape of Good Hope; being the completion of a telescopic survey of the whole surface of the visible heavens, commenced in 1825…

FIRST EDITION of Herschel’s monumental survey of the stars of the southern hemisphere, completing the task begun by his father William, who fifty years earlier had catalogued the northern celestial hemisphere. Herschel selected the Cape of Good Hope for the site of this project, and spent five years there. Using a 20-foot reflecting telescope brought from England, he swept the whole of the southern sky. By the time he left in 1838 he had catalogued 1,707 nebulae and clusters, and listed 2,102 pairs of binary stars. He carried out star counts, on William Herschel’s plan, of 68,948 stars in 3,000 sky areas. He produced detailed sketches and maps of several objects,, including the Orion region, the Eta Carinae nebula, and the Megallanic Clouds, and extremely accurate drawings of many extragalactic and planetary nebulae. He recorded in detail the brightening behaviour of Eta Carinae in December 1837. Herschel invented a device called an astrometer, and with it introduced numerical measurements into stellar photometry. See DSB 6, p. 326 and ODNB for long accounts of Herschel’s time in South Africa. Norman catalogue 1056. This was Herschel’s magnum opus.