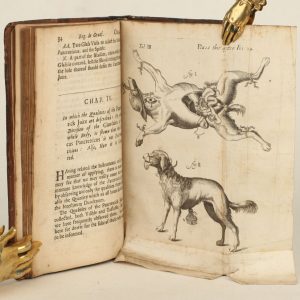 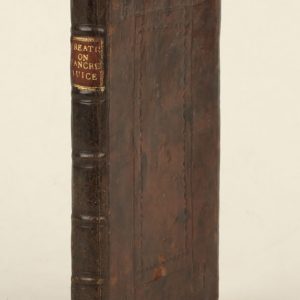 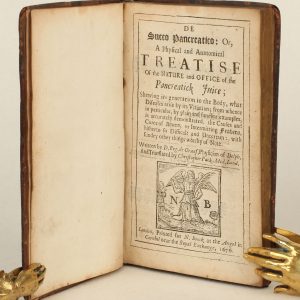 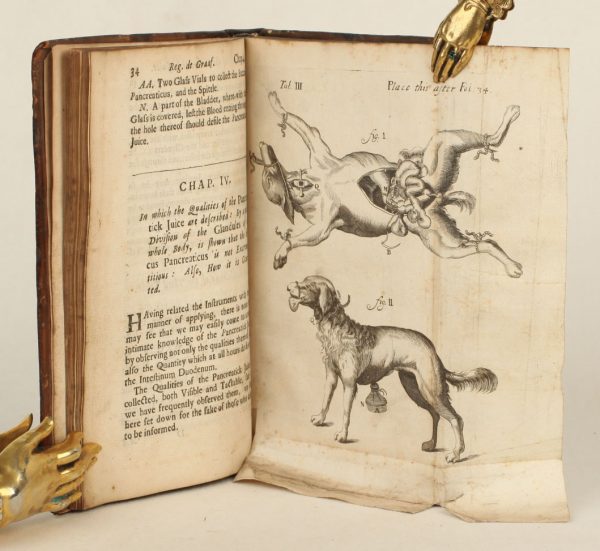 De Succo Pancreatico: Or, a physical and anatomical treatise of the nature and office of the Pancreatick Juice; shewing its generation in the body, what diseases arise by its vitiation; from whence in particular, by plain and familiar examples, is accurately demonstrated, the causes and cures of agues, or intermitting feavers, hitherto so difficult and uncertain: with sundry other things worthy of note. Written by D. Reg. de Graaf, physician of Delph, and translated by Christopher Pack, Med. Lond.

FIRST EDITION IN ENGLISH. See G&M 974 (the first, exceedingly rare, edition of 1664). The first canalisation of the pancreatic duct. De Graaf was one of the earliest investigators of the pancreatic secretion. He collected the pancreatic juice of dogs by means of introducing a temporary cannula, made from the quill of a duck, into the pancreatic duct of a living dog. He studied the liquid so obtained, commenting on the small quantity secreted and on its apparent properties. He discusses the uses of this juice in digestion. He compared it with human pancreatic juice and found the two to have identical properties. “De Graaf’s account of his unsuccessful attempts to collect pancreatic juice, followed by his eventual success, is one of the most interesting passages in the history of the experimental method…” (Foster). Wing G1463. Foster, Lectures on the history of physiology, pp. 153–157, and Selected Readings in the History of Physiology, pp. 166–168. Russell, British anatomy, 329. Norman catalogue 924 (this copy). This was the only English edition, and while not as difficult to find as the first edition, it is still of considerable rarity.