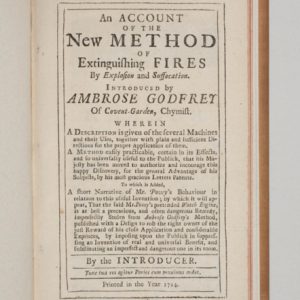 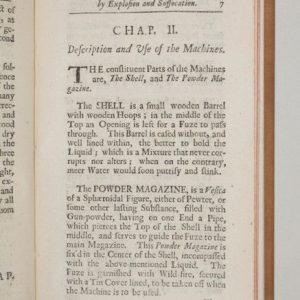 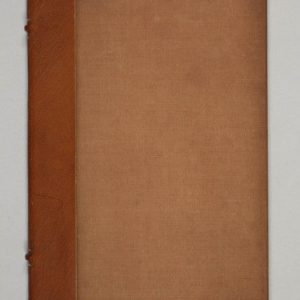 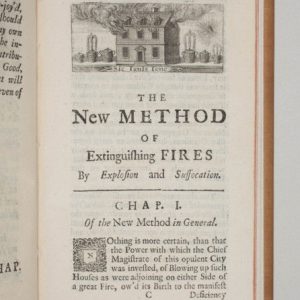 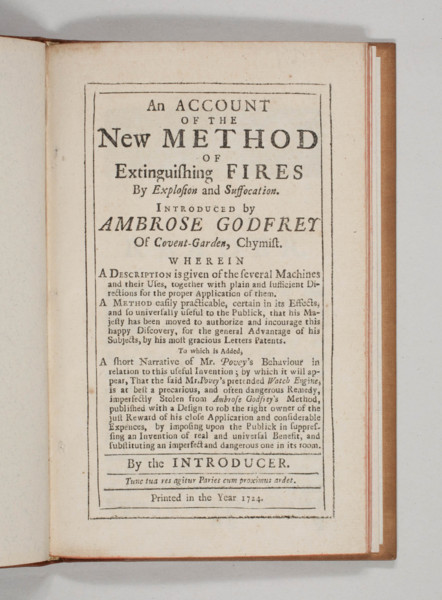 An Account of the New Method of Extinguishing Fires by Explosion and Suffocation. Introduced by Ambrose Godfrey of Covent-Garden, Chymist. Wherein a description is given of the several machines and their uses… A method easily practicable, certain in its effects, and so universally useful…that his Majesty has been moved to authorize…this happy discovery…by…letters patents. To which is added, a short narrative of Mr. Povey’s behaviour in relation to this useful invention…

FIRST EDITION. This work is an exposition of the method invented by Godfrey to extinguish fires by exploding gunpowder inside a barrel of water “impregnated with a certain preparation, an enemy to fire”, and not simply water alone. This method of extinguishing fires by suffocation is currently used to great effect on burning oil-wells and similar fires. A description of the device itself is followed by directions for its application. On pp. 4–6 Godfrey reports on two highly successful full-sized demonstrations of his invention in 1723, at the first of which several members of the Royal Society were present. The last section consists of accusations against Charles Povey of Hempstead whose design of a “watch engine” was purportedly stolen from Godfrey. This section was omitted from the second edition, published in 1743. Ambrose Godfrey-Hanckwitz (1660–1741), originally from Germany, was for many years employed as operator in the laboratory of Robert Boyle. In 1729 he was elected a Fellow of the Royal Society. He later set up his own laboratory where he made and sold the white phosphorous for which he became famous. In the introduction to the present book he expresses his indebtedness to Boyle “for the first hints of the matter whence it was made.” Apart from a paper on phosphorous in the Phil. Trans., this work was Godfrey’s only publication, and is extremely rare. Neville I, p. 537. Partington II, p. 543. Not in Cole.