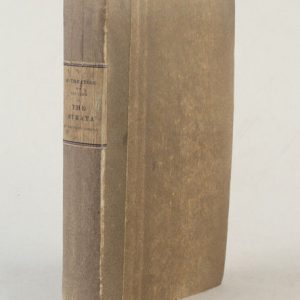 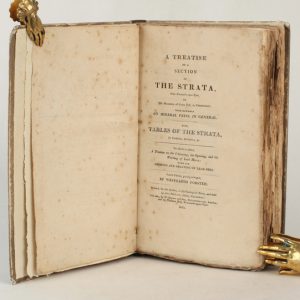 A Treatise on a Section of the Strata, from Newcastle-upon-Tyne, to the mountain of Cross Fell, in Cumberland; with remarks on mineral veins in general. Also, tables of the strata, in Yorkshire, Derbyshire, &c. To which is added, a treatise on the discovery, the opening, and the working of lead mines; with the dressing and smelting of lead ores. Second edition, greatly enlarged…

[Alston(?):] Printed, for the author, at the Geological Press, and sold by John Pattinson, Alston, Cumberland; sold also, by W. Baynes and Son…London; and by Thomas Bell, Newcastle-upon-Tyne.1821

8vo, pp. xii, x, (11)–422, xvi (Appendix), (18) index and list of subscribers, 11 engraved plates numbered 3–10 and 12–14 (including 10 folding and 4 hand-coloured), folding letterpress table. With 20 diagrams and sections of strata in the text. Some foxing and light offsetting from the plates. Modern drab boards as the original, printed paper label on spine, uncut. Inscribed on a (rather dust-soiled) binder’s leaf at the beginning: “Presented to the Dub[lin] Nat. Hist. Society by Dr. Bryan Bellingham Esq M.D. [deleted, and added beneath:] Mr. Richard Glennan.

Second edition, greatly enlarged from the first which contained only 156 pages. One of the first English books to illustrate geological strata by the use of a section. “The convenient method of showing graphically a stratigraphical succession by a geological column was already in use at the end of the eighteenth century… Westgarth Forster’s book…is notable for a very long column, some 51⁄2 feet long altogether, which is shown in portions and comprising a total thickness of strata of ‘1345 yd. 0 ft., 10 in.’ ” (Challinor, p. 93). The work is divided into three parts: on the strata of coal, on mineral veins in general, and on the discovery of mines, which includes lists of mines, lists of smelting houses, heights of principal mountains, etc. “Though the book was written when the science of geology was in its initial stage; when even people of education recognised no distinction between one kind of rock and another; when such terms as stratified and unstratified, aqueous and igneous, seldom appeared in print, and were scarcely ever heard; when the great works of Buckland, De la Beche, Phillips, Lyell, Murchison, Sedgwick, and other geologists had not yet appeared, the classification of the strata which it contains is the one still in use” (preface to the third edition of 1883). Hoover 318 (also the second edition).