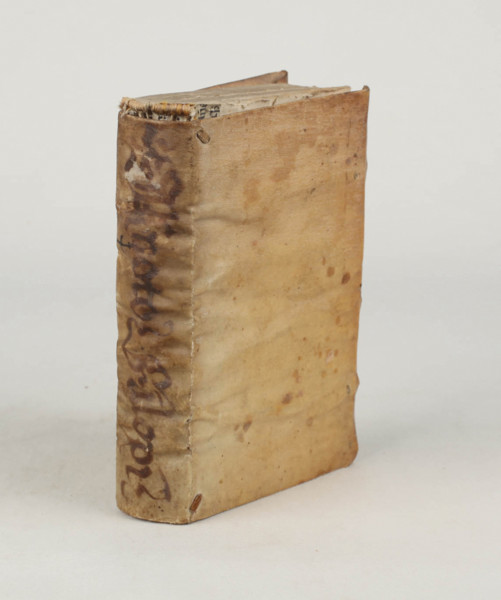 Small 8vo, ff. (viii), 222. A few early MS marginalia. Light spotting and staining on the title and a tiny hole in the margin. Contemporary limp vellum, spine wrinkled and shrunk at the head, ties missing, several tears and small holes in the front endpapers. Generally a very clean copy in good original state, with the binding essentially undisturbed.

FIRST EDITION, 1562 issue (see below). See G&M 378.2, 1208, and 1537 (1561 issue). The greatest Italian anatomical book of the sixteenth century. Rather than a complete study of the whole of anatomy, Falloppio, who was a pupil of Vesalius, designed this work as a critical commentary of his teacher’s De humani corporis fabrica, correcting some of its errors and adding additional observations and details. For this reason there was no need for illustrations. In fact it was a work of great originality, in which Falloppio reported very many new discoveries and observations. It was his only work published during his lifetime, and therefore the only one which can be said to be fully authentic. It is now very rarely offered for sale. Falloppio discovered and first described the chorda tympani, semicircular canals and the “aqueduct of Falloppius”, correctly described the structure and course of the cerebral vessels, and knew the circular folds of the small intestines. He gave the first description of the “circle of Willis”, enumerated all the nerves of the eye, and introduced a number of anatomical names, including the vagina and placenta, and is best remembered for his account of the tubes named after him. He also gave excellent descriptions of the ovaries, hymen, clitoris, and round ligaments, and proved the existence of the seminal vesicles. He included an important account of the kidneys, which may antedate that of Eustachius. For a full account of Falloppio’s discoveries, see the article by C.D. O'Malley in the DSB. Vesalius replied positively to Falloppio’s book with his Anatomicarum Gabrielis Falloppii observationum examen, 1564, published posthumously by his friends. This issue was printed from the same standing type as the first of 1561, and should therefore be properly called an issue, not a new edition. It has a “I” added to the date on the title-page, some of the pages with tables are reset, some of the errata are corrected, and the foliation, although the same, is reset (e.g., f. 178 is misnumbered 278). The main body of the type is identical in every way. In addition, leaf (8), the errata leaf, is usually cancelled but if present exists in two states, one printed on both sides and one printed on the recto only. In this copy it is present and printed on both sides. The final leaf with the printer’s device and colophon dated 1561 was excised from all copies of this issue. See Lilly, Notable medical books, 39, and Norman Catalogue 757 (1561 issue). Politzer, History of otology, pp. 51–55.