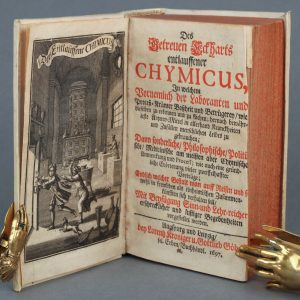 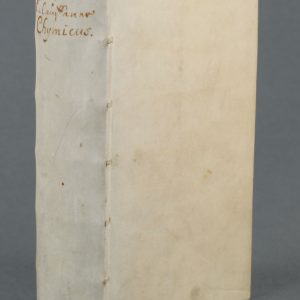 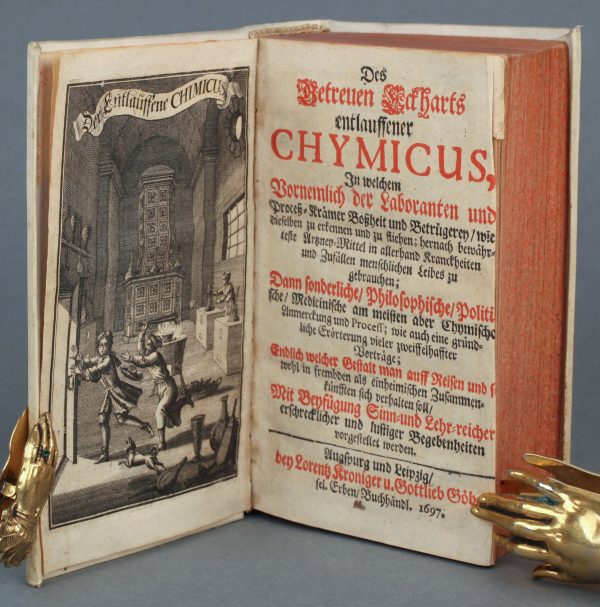 FIRST EDITION, second issue, with the date altered from 1696. “The book is directed against chemical quackery of the time and is of considerable historical interest. “One point which has not, I believe, been mentioned before is the very interesting passages referring to Eckhart’s visit to England, and particularly his relations with Robert Boyle. One visit to Boyle is mentioned on pp. 653–655, where Boyle discusses some colours with him and makes some experiments. He shows him a ring made of ‘auro philosophico’ and invites him to visit the Collegium Regium with him. This is described on pp. 678–681, when Eckhart and his friends meet Boyle at Gresham College… They see the library and inspect the library catalogue… There is a further mention of Boyle, when he makes his return visit to Eckhart (p. 790), and they talk for two or three hours” (Duveen). Ettner (1650–1724) was a noted physican and chemist from Breslau who often wrote under the pseudonym Eckhart. Fulton 359 (this issue). Duveen p. 198 (this issue). Ferguson I, p. 252 and Neville I, p. 429 (both 1696 issue).